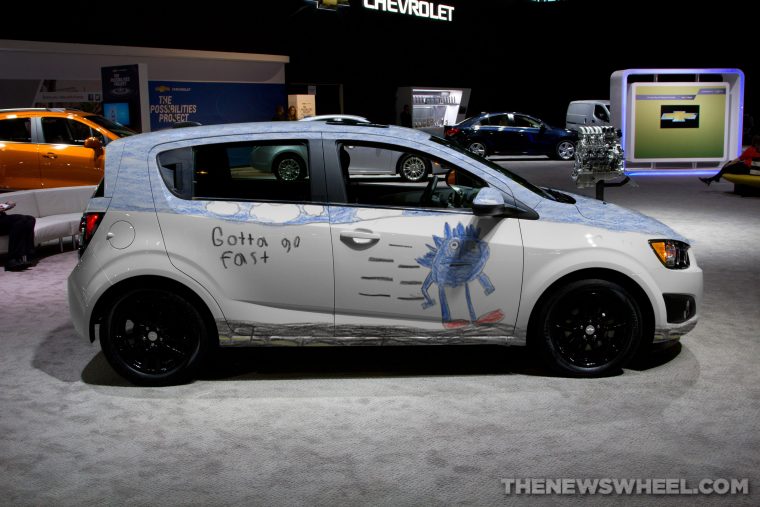 On Friday night, Honda made a splash at the San Diego Comic-Con by unveiling the “Sonic Civic,” a 2016 Civic Touring sedan specially designed to celebrate the 25th anniversary of the classic Sega game “Sonic the Hedgehog.”

Not to be outdone, last night Chevrolet debuted its own 2017 “Chevy Sanic,” a Chevy Sonic hatchback uniquely named and customized in homage to the popular “Sanic the Hegehog” meme. The concept car was revealed to Silicon Valley journalists during the 2016 Meme-Con at AT&T Park in San Francisco.

The one-of-a-kind car features a “Gotta Go Fast” wrap based on the infamously inept Sonic fan art that has inspired endless internet mockery since it first appeared on a gamer fan site back in 2008. The vehicle’s hood is adorned with a fake “Sanic” logo, referencing another meme that is meant to parody amateurish Sonic illustrations.

According to Steven Edwards, Chevrolet’s Vice President of Millennial Outreach, the hot hatch is an attempt to appeal to younger consumers.

“In order to ‘find new roads,’ Chevrolet has to be continually developing innovative features and ideas that are relevant to young drivers,” Edwards told reporters at the Sanic’s San Francisco premiere. “That can mean enhancing smartphone connectivity with standard Apple CarPlay and Android Auto, or it can mean a marketing strategy that embraces the dankest of memes.”

The vehicle is in keeping with other “hip” Chevy marketing campaigns, including the bowtie brand’s all-emoji press release and corresponding #ChevyGoesEmoji music video. However, Edwards says that the 2017 Chevy Sanic is just the tip of the iceberg for what the automaker has planned.

“Eventually, I am hoping to see the entire General Motors portfolio ‘memed to the seams,’ as it were,” Edwards continued. “For example, people looking for a Sport Utility Vehicle that reflects their interest in advice animals would probably gravitate towards a Chevy Suburban Mom. Similarly, I’d like to think we could really shake up the luxury segment with a Cadillac That Escaladed Quickly. Or perhaps target entry-level luxury consumers with a Buick Encore.gif, which could be based on that slow clap gif from Citizen Kane or something.”

It remains to be seen whether other brands will attempt to copy GM’s new meme-centric marketing strategy, though there are rumors that FCA is currently developing a Chrysler Town & Country & Knuckles.