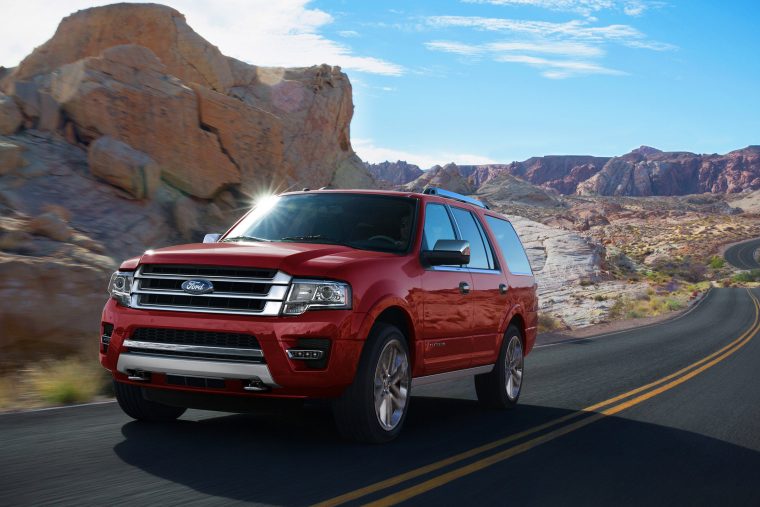 The 2017 Ford Expedition is a full-size SUV capable of seating up to eight and towing loads beyond what even mid-size trucks can handle. In fact, its top-of-the-class cargo, towing, and passenger capabilities make it a top choice for customers still seeking to buy an old-school SUV rather than a crossover, for which they’ll be rewarded with nigh-unparalleled utility. Old-school doesn’t mean outdated, however, as the Ford Expedition is as modern as vehicles get when it comes to amenities and technologies, especially if you’re willing to invest a little extra.

The 2017 Ford Expedition is available in four trim levels: XLT, Limited, King Ranch, and Platinum. Each trim is available with an EL (“extended length”) version. 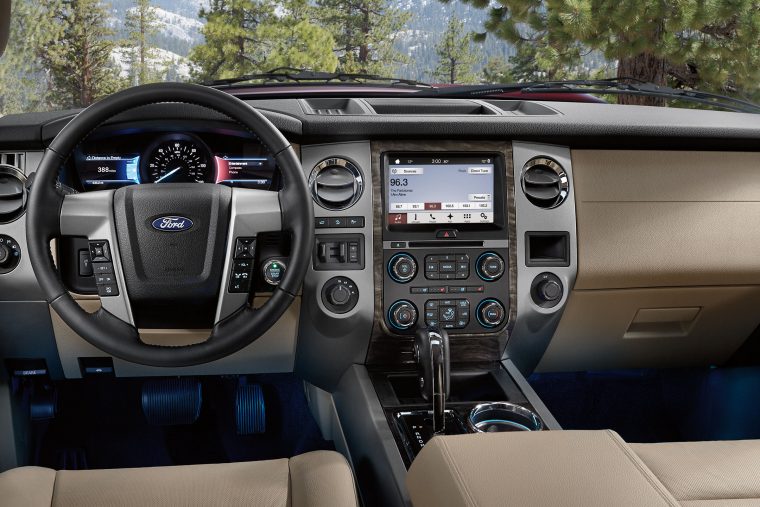 What’s New for the 2017 Ford Expedition?

Not much has changed for the 2017 Ford Expedition other than a few technology updates. Compared to the 2016 model, it now gets built-in Apple CarPlay and Android Auto compatibility with the SYNC 3 infotainment system as well as standard HD Radio on the base XLT trim. 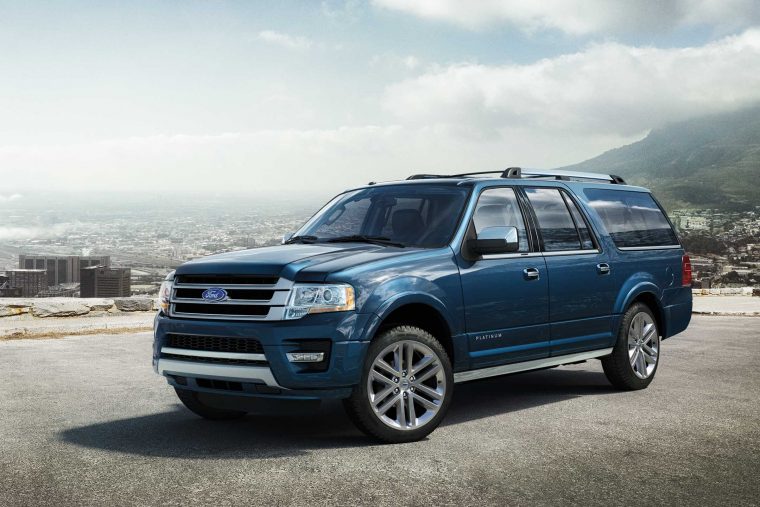 The 2017 Ford Expedition is a big, boxy, and brawny SUV that continues to embrace the dimensions and style of generations past, putting an emphasis on utility and cargo capacity. That’s not to say it’s not attractive, but if you’re looking for the same massive grille that every competitor seems to be slapping on its vehicles, the Expedition’s more dignified front end might not be to your liking. That’s probably because the Expedition doesn’t need an over-the-top, in-your-face grille to make itself noticed. It’s already quite imposing at 206 inches of length, and the EL version adds another 15 inches to make it even more intimidating (and, of course, accommodating to cargo).

Exterior available on Limited (adds to or replaces features on XLT):

Exterior available on King Ranch (adds to or replaces features on Limited):

Exterior available on Platinum (adds to or replaces features on King Ranch): 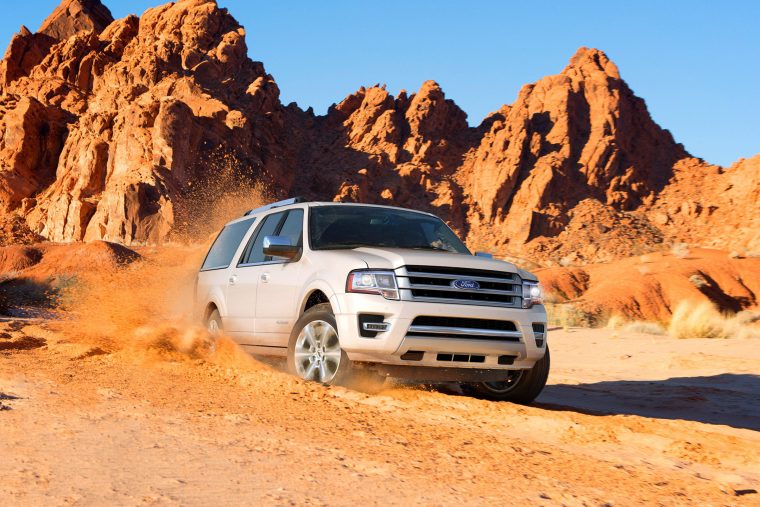 Every 2017 Ford Expedition model is powered by a 3.5-liter EcoBoost® V6 that makes 365 horsepower and 420 lb-ft of torque with a good chunk of help from twin-turbocharging. Not only does this provide more than enough grunt to haul around the driver and seven passengers, it also contributes to the Ford Expedition’s best-in-class maximum towing capacity of 9,200 lb when properly equipped. A six-speed automatic transmission and rear-wheel drive (RWD) are standard while four-wheel drive (4WD) with a low-speed transfer case is available on all trims. Despite its size, the 2017 Ford Expedition accelerates from 0 to 60 mph in around 6.5 seconds, making it not just the best vehicle in its class for towing and hauling but also one of the quickest. 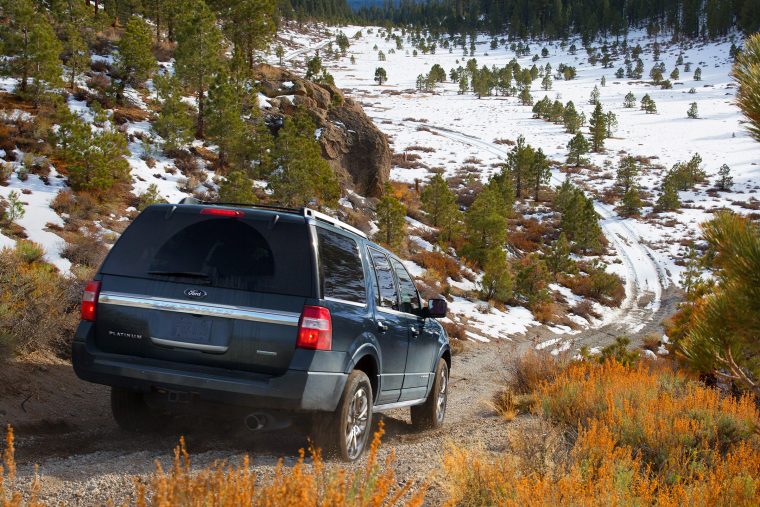 Despite having the same engine across the board, the 2017 Ford Expedition’s efficiency will depend on drivetrain and whether it is an EL model. The standard-length Expedition with RWD is rated at an EPA-estimated 15/22/18 mpg city/highway/combined, while the 4WD model and the Expedition EL FWD are both estimated at 15/20/17 mpg. The Expedition EL 4WD gets just 15/19/16 mpg. Total range on a single tank varies between an estimated 476 miles and 570 miles depending on configuration. 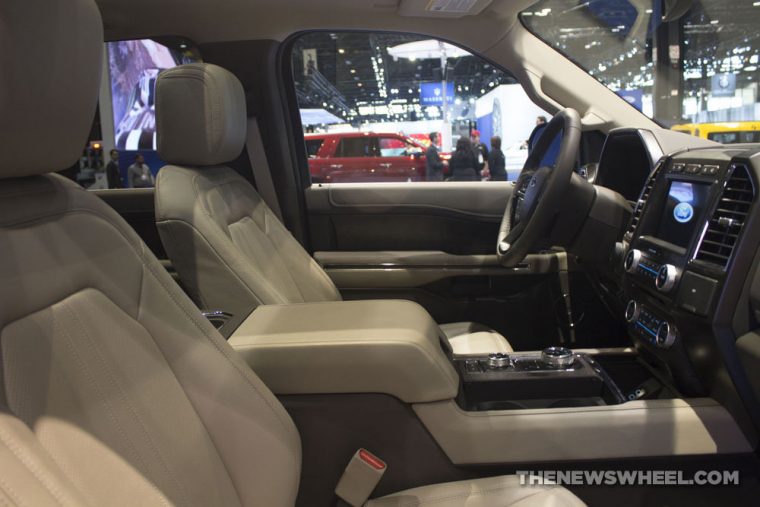 Every 2017 Ford Expedition model comes standard with three rows of seating and eight-passenger seating capacity. If you don’t mind removing a passenger out of the equation, the standard three-person bench can be swapped out with two bucket seats for additional comfort. Customers should keep in mind that the EL model does not increase rear legroom (though it is already a hefty 37.7 inches for the third row—nothing for even adults to moan about) but rather adds an enormous amount of cargo space behind the passengers, increasing it from 18.6 cubic feet on the standard model to 42.6 cubic feet. When the second and third row are folded down, cargo space increases to 108.3 cubic feet on standard models and 130.8 cubic feet on EL models.

The 2017 Ford Expedition also comes with lots of comfort, convenience, and technology features to enjoy, even on the base XLT trim. Check out the full breakdown of these just below.

Interior available on Limited (adds to or replaces features on XLT):

Interior available on King Ranch (adds to or replaces features on Limited):

Interior available on Platinum (adds to or replaces features on King Ranch): 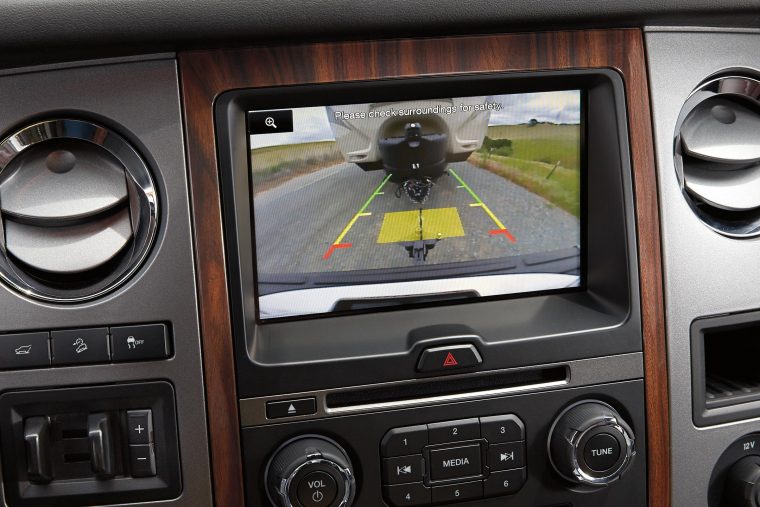 The 2017 Ford Expedition earned the highest possible five-star score for overall safety in government crash tests and comes standard with various safety features, including full-length side curtain airbags and trailer sway control. In performance testing by Edmunds.com, the Ford Expedition came to a stop from 60 mph in 126 feet, an average distance for its class. It has yet to be tested by the IIHS as of this time.

The SUV also comes standard with rear parking sensors and a rearview camera, as well as front sensors on the Limited and King Ranch. The King Ranch and Limited get standard blind spot monitoring, which is optional on the other trims. Additionally, the 2017 Ford Expedition comes standard with a programmable MyKey system, which allows owners to set maximum speed limits and stereo volumes for secondary drivers, aimed at monitoring teen drivers and valets behind the wheel.

Ford News: What we know so far about the 2018 Ford Ranger