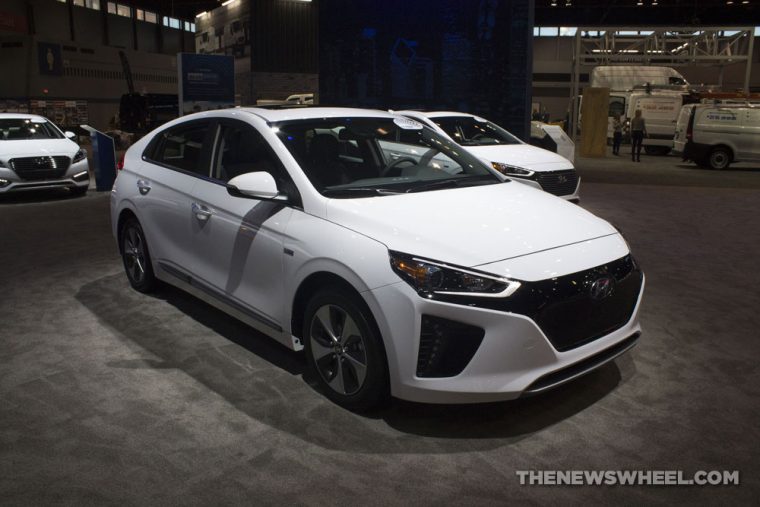 Ever since Hyundai revealed the name of its new trio of hybrid/electric vehicles in November 2015 and debuted them at 2016 Geneva Motor Show a year ago, customers have been itching to get their hands on these exciting new models. Promising to rival the overrated Toyota Prius and boost Hyundai’s sales numbers, the Hyundai Ioniq Hybrid, Ioniq Plug-in, and Ioniq Electric will serve as a much-needed expansion to Hyundai’s lineup.

After over a year of waiting, the first of the three–the 2017 Hyundai Ioniq Hybrid–is finally on sale to the public. We have pricing and feature information on it.

Spotlight on Ioniq Tech: Learn how you can get Apple CarPlay on your Hyundai

Firmly Clench Thy Pantaloons, or the 2017 Ioniq’s Price Shall Dispatch Them Posthaste

Without further ado, the 2017 Ioniq Hybrid’s base price begins at a shocking $23,035–a couple thousand less than the cheapest Pruis Two. At the highest end, the Ioniq maxes out around $28,335.

If that’s got your attention, you’ll be even more excited to hear that the Ioniq Hybrid can achieve up to 58 mpg combined city/highway driving. Keep an eye on Hyundai’s website for the purchase configurator to be launched shortly for the Ioniq.

Calm Down! How the Hyundai Smart Cockpit can sense if you have road rage