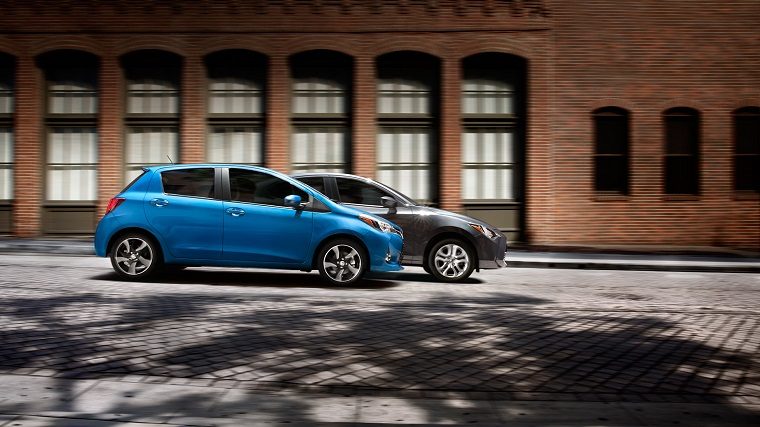 The 2017 Toyota Yaris is a subcompact hatchback that aims to satisfy customers seeking a small, efficient, and inexpensive car with decent practicality and resale value. Its performance won’t kick you in the butt and its styling will probably not make you fall in love, but it checks a lot of the right boxes, especially the one that matters most: value.

The 2017 Toyota Yaris is offered in three trim levels: L, LE, and SE. The L and LE are available as either a three-door or five-door model.

Meet the New Guy: The 2017 Toyota Yaris iA is a new addition to the lineup 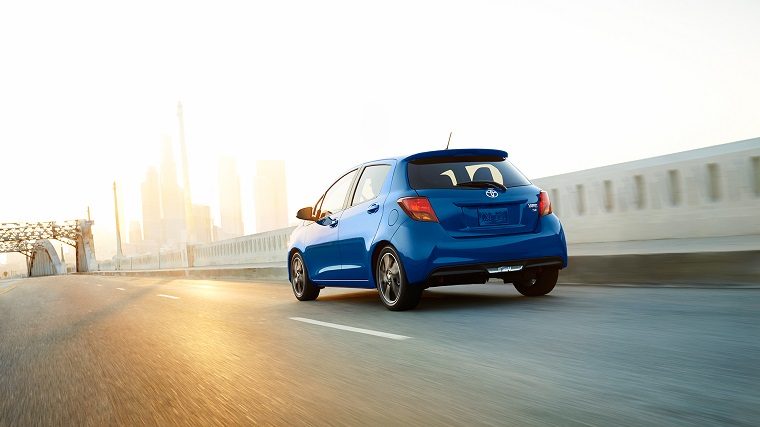 As with most 2017 Toyota models, the 2017 Toyota Yaris now comes standard with the automaker’s new Safety Sense C suite of active safety technologies. 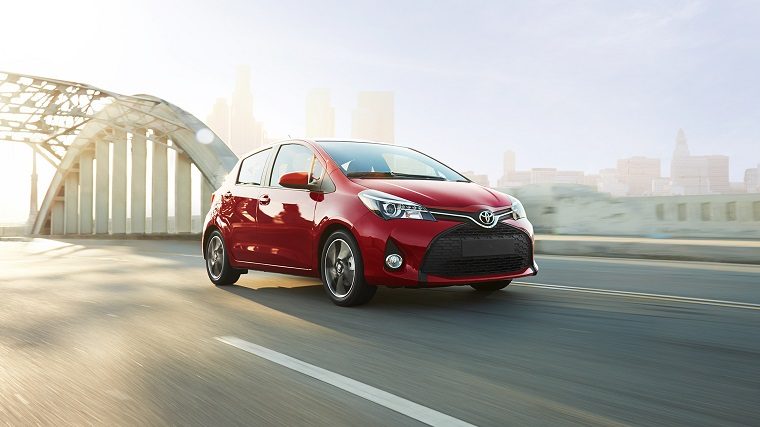 The appearance of the 2017 Toyota Yaris slightly depends upon whether you choose the three-door or five-door model; the former has a more coupe-like profile but the latter is a better choice if you expect to regularly bring more than a single passenger along for the ride, if only for the sake of more convenient access to the rear seats. The Yaris probably won’t turn faces in admiration but won’t get you looks of disgust, either. It’s small, cute, and you’d expect any driver that steps out of one to have a bubbly personality. Even so, you can still make it look a little racier on upper trims with black accents and a rear spoiler and diffuser.

Exterior available on LE (adds to or replaces features on L):

Exterior available on SE (adds to or replaces features on LE): 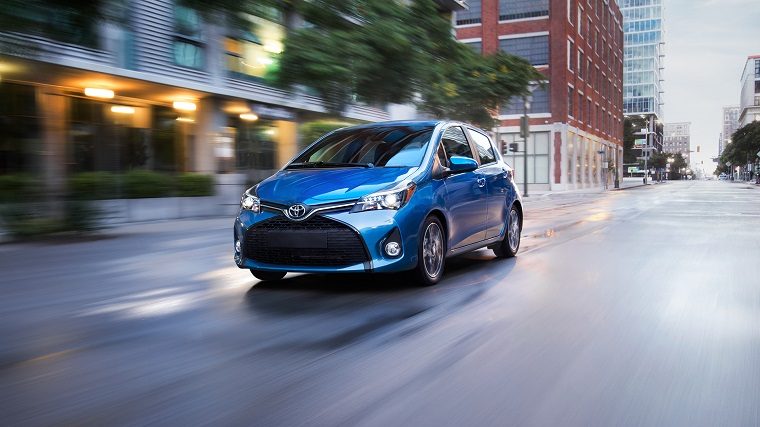 The 2017 Toyota Yaris is a little car that needs but a little engine to make it go. Under the hood is a 1.5-liter inline four-cylinder engine with Variable Valve Timing with intelligence (VVT-i) that makes 106 horsepower and 103 lb-ft of torque, just enough to make the 2,300-lb car feel a little peppy, but not excessively so. Power is sent to the front wheels via either a five-speed manual or a four-speed automatic transmission, which could use some updating to go against the competition’s smoother six-speeds or CVTs. 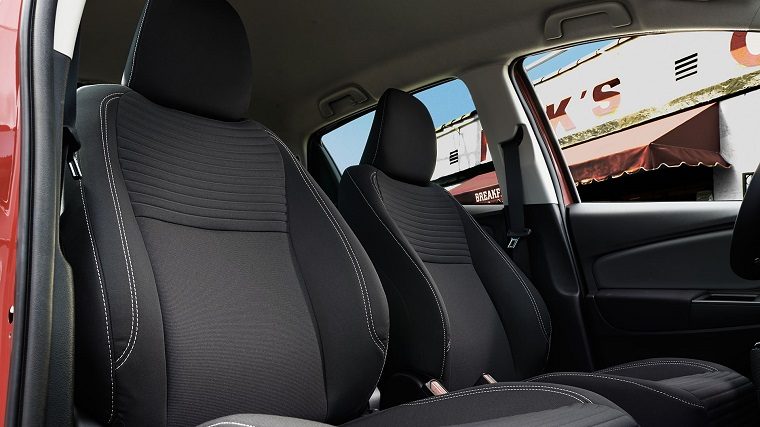 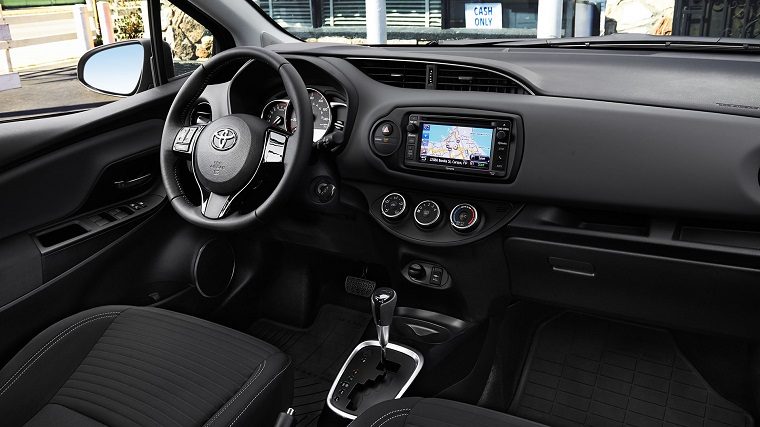 The 2017 Toyota Yaris’ interior is surprisingly pleasant, with plenty of soft-touch surfaces and a tasteful dash design that give it a premium feel despite the low cost, which is only enhanced by the standard 6.1-inch Entune touchscreen infotainment system. Unfortunately, while there is decent interior space in both the three-door and five-door models, you may find it difficult to get in the perfect driving position because of the lack of a telescoping steering column, and no amount of clever design tricks can make adults in the back seat forget the Yaris is a subcompact car with limited legroom.

Interior available on LE (adds to or replaces features on L):

Interior available on SE (adds to or replaces features on LE): 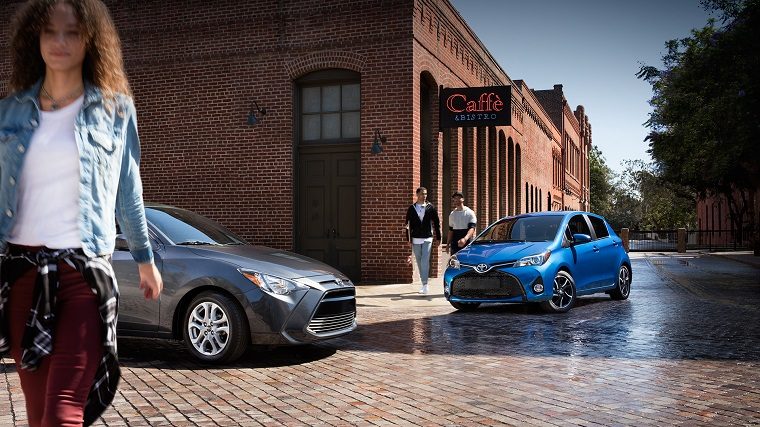 For the 2017 model year, the Toyota Yaris is equipped with the automaker’s new Safety Sense C suite of active safety features, which includes automatic high-beam control, forward collision warning with automatic emergency braking, and lane departure warning. The Yaris received a four-star score for overall safety in government crash tests by the NHTSA and the highest rating of “Good” in all of the IIHS’s crashwortiness evaluations except in the “small overlap front” category, where it received a rating of “Moderate.”

Learn More: Take an even closer look at the 2017 Toyota Yaris