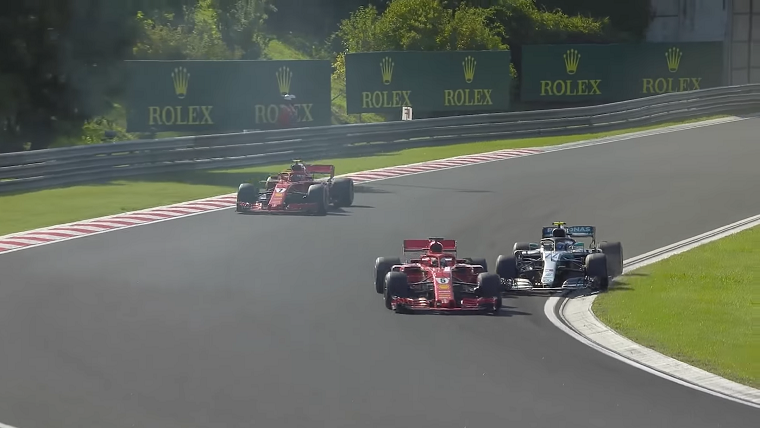 The moment before Sebastian Vettel and Valtteri Bottas make contact 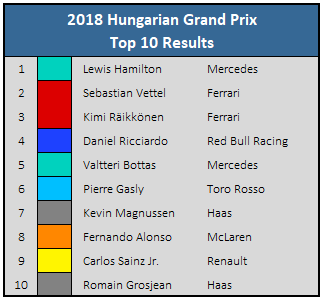 The writing was on the wall: with Lewis Hamilton having claimed pole yesterday, it would have been difficult for rival Sebastian Vettel to somehow claim victory at the 2018 Hungarian GP, especially with Valtteri Bottas to act as a buffer for his Mercedes teammate, and with Vettel’s own teammate Kimi Räikkönen to pass first.

And while Hamilton did ultimately win the 2018 Hungarian GP, Vettel probably came closer to victory than it would seem by merely looking at the timing sheet. He jumped Räikkönen on the first lap and, after Bottas changed tires, had lapped fast enough to have comfortably extended the gap beyond the pit stop window.

In other words, Vettel should have been able to come out ahead of Bottas after his own pit stop, and not far behind Hamilton. What’s more, he would have been on much fresher and softer tires and would have had a good chance at racing for the win.

Instead, he was massively hindered by backmarkers at a crucial time — including an obstinate Carlos Sainz who went past a whopping nine blue flags before moving over (instead of the maximum of three) — and by Ferrari’s own sloppy pit stop, its second of the day.

As a result he lost all the time he had made up and came out behind rather than ahead of Bottas. That being said, he was, for a long while, unable to pass despite his massive speed advantage — such is the excessive effect of dirty air at the Hungaroring. He eventually made the move stick and was lucky not to be taken out of the 2018 Hungarian GP by the Mercedes driver.

Buying vs Leasing: How should you finance your next car?

Räikkönen followed suit and the two Ferrari drivers claimed the podium behind Hamilton, who, thanks to Bottas, Sainz, and Ferrari’s pit crew, was never put under any sort of pressure. Nonetheless, given how difficult it was to overtake Bottas, it’s unlikely Vettel would have been able to get past Hamilton, who is faster and better at wheel-to-wheel racing than his teammate.

But the fastest man on the track was no doubt Daniel Ricciardo in the Red Bull Racing car, who sliced through the field with such speed that it must have made Max Verstappen feel even more ire that his car broke down only six laps into the race while he was running fifth.

McLaren’s Stoffel Vandoorne also fell victim to heartbreaking reliability issues. He had been running behind Fernando Alonso all race long and was set for a points finish when he lost engine power and was forced to retire on lap 50.

Pierre Gasly had his second best result of the season with a sixth-place finish. But Nico Hülkenberg, who had until today managed to score points at every race he finished, failed to get inside the top 10 as a result of his own poor qualifying yesterday and bad strategy.

Hamilton is now 24 points clear of Vettel in the championship — nearly a full race win’s worth of points — and there are nine races still to go. Ferrari still looks like it has the fastest car, but all of the small mistakes and missed opportunities are beginning to add up.

With the 2018 Hungarian GP over, it’s now time for the summer break. The teams will return to Formula One racing at the legendary Spa-Francorchamps circuit in Belgium in late August. 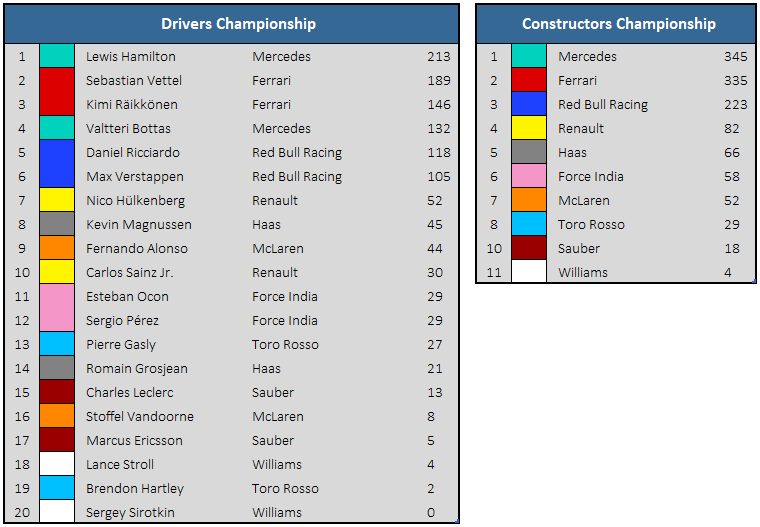