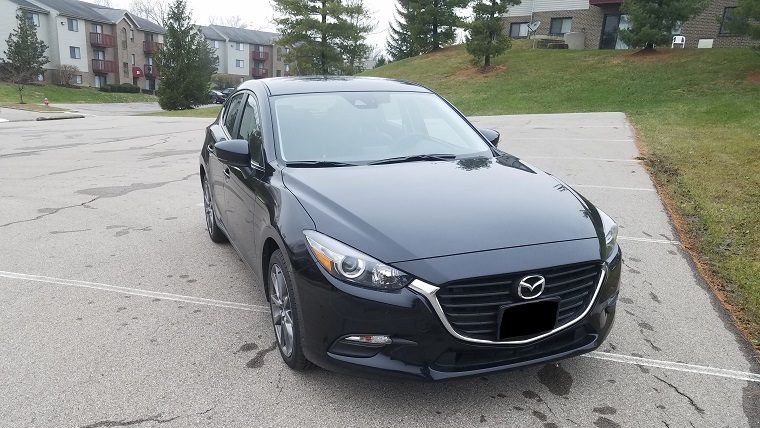 Last week, I drove into my local Mazda dealership with my 2015 Mazda3 i SV sedan (the lowest available trim level for that model year), which I had leased over three years ago, and drove out with a 2018 Mazda3 Touring hatchback.

You could say I’m a bit of a Mazda fan, and it’d also be true to say this runs in the family. My mother has owned two Mazdas in the past and my sister at least one to my knowledge, and driving these vehicles had definitely influenced my decision to lease one in the first place.

I’d evaluated my options many times, but always came back to the 3. A few things were important to me: the car needed to be affordable, fun to drive for the segment, and — because I expected my fiancée would need to drive it occasionally — it needed to be an automatic and to have good trunk space. The latter is something I learned after running into cargo issues with the sedan, which has a much smaller trunk than the hatchback. 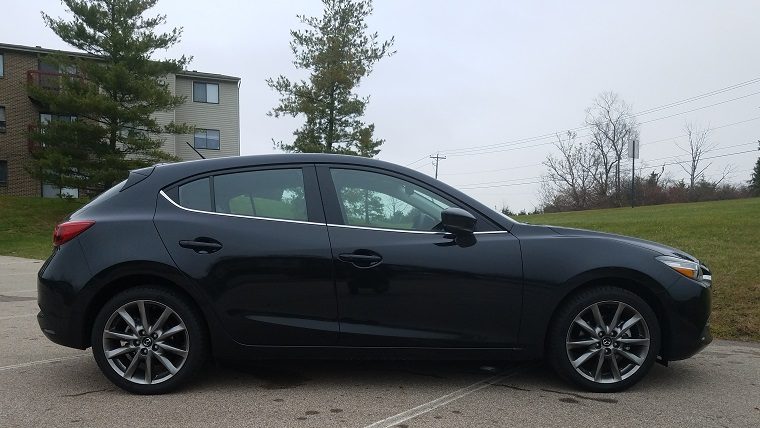 I had my eye on the new Toyota Corolla Hatchback, which seems to be a fun little thing, but it’s only offered with a manual or a CVT, and I have no interest at all in driving a car with a CVT transmission. Even with simulated shift points, it’s just not as satisfying as having real gears.

I also thought about waiting for the all-new 2019 Mazda3, but eventually decided I didn’t want to get a car only to replace it after a year. If the new-gen Mazda3 is good, I’m sure it will be good a few years from now should I still be interested.

I gave Subaru a thought but the WRX is out of my price range and the BRZ’s design is a tad bit outgoing for me. For a time I really wanted a Mazda MX-5 Miata as a personal fun car I could daily drive, but then I sat in one and realized I would never be comfortable. I’m 6’3 and my head brushed against the top and there was no room for my knees except beside the steering wheel. 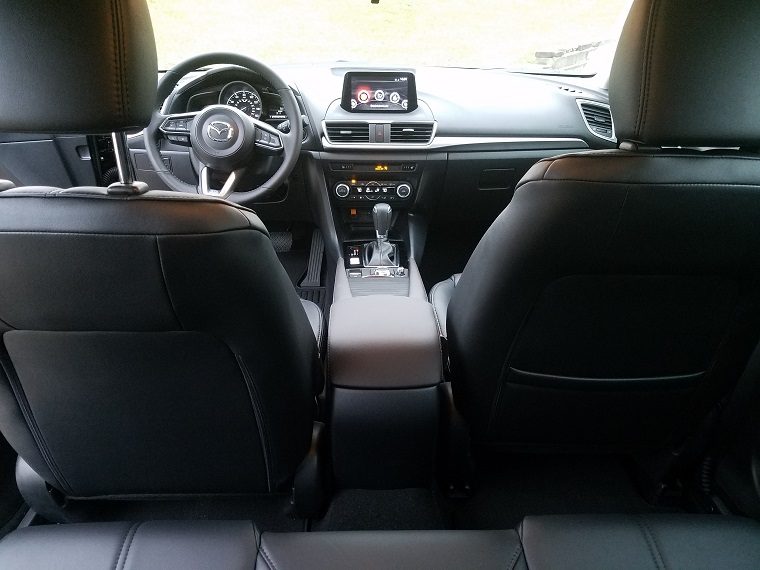 I’ll skip the rest of the deliberations. Ultimately, I went for the 2018 Mazda3 Touring hatchback. It wasn’t too tough of a decision. After all, I was already quite familiar with the 2015 model, with which it had a lot in common. I love its transmission (third gear is so, so sweet) and its manual mode, and the handling is tight and responsive. It’s not a sports car, but among budget compact cars, it’s about as fun as it gets.

By upgrading to the Touring model I got a few nice features: leatherette seating, which I must say almost looks and feels like the real thing, as well as a 2.5-liter engine, up half a liter on the base model. That brings horsepower up to 184 from 155. Unlike the sound, the power increase is actually not very noticeable, likely because the hatchback weighs 200-300 pounds more than my 2015 sedan.

What is noticeable, however, is the Sport mode. I’d done a quick Google search to find out what it did, but it was unnecessary, as its effects were immediately clear when I first engaged it. The throttle response is much sharper and, if not in manual mode, the automatic transmission’s shift points are adjusted to keep the revs higher. The cost, of course, is fuel economy, but it’s a worthy sacrifice for me (but the fuel tank is bigger, so I can go about as far before needing a fill-up). 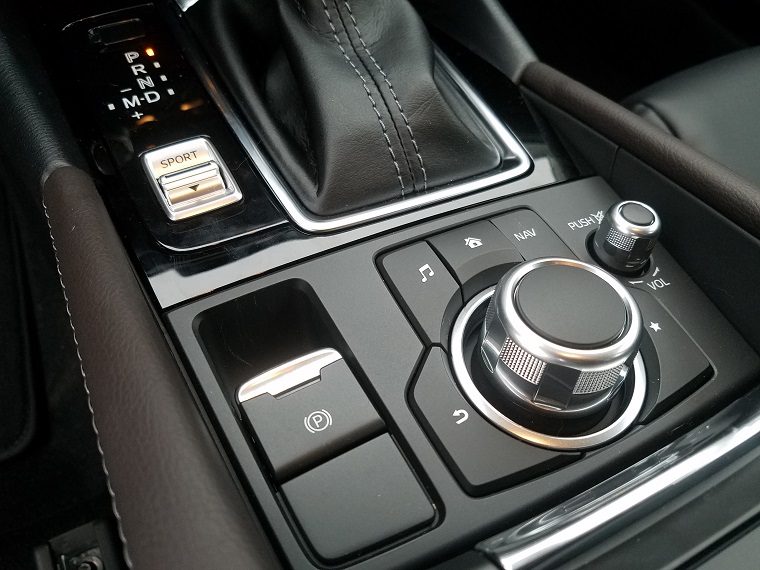 I’m enjoying the other features as well. It’s nice to have a power seat with lumbar support, a rearview camera, and a good infotainment system that’s simple to use. I love the rotary control near the shifter, something most cars in this price range simply don’t have. It’s far easier and safer to use the infotainment system that way than by reaching for the touchscreen. Bluetooth and Android Auto were also easy to set up, and I think I’ll be using my phone for music and podcasts more than I was in the past.

There are two features I don’t entirely like: the blind spot monitoring system and the rain-sensing wipers. To start with the blind spot monitoring system, I like that it gives me an indicator in my side mirrors when a car is next to me. However, over the course of about 300 miles, it has already given me a false flag twice, and I don’t like how aggressively the system gives you a warning beep when you engage your turning signal while the light is on. It felt like it was punishing me for preemptively engaging my signal, so I turned the warning off in the setting.

I doubt this behavior is unique to the Mazda3, though. I drove a Chrysler Pacifica minivan during a trip to Oregon earlier this year and it had the same issue. 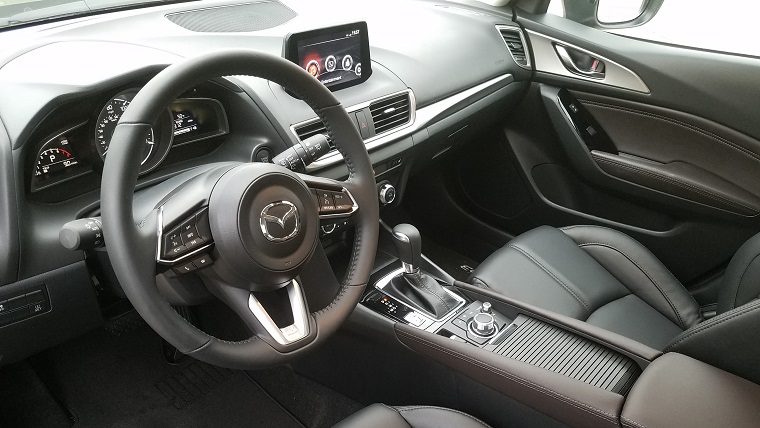 Next, the wipers. My 2015 sedan had intermittent wipers, which gave me full control over their speed. The new hatchback, on the other hand, can only be set to off, automatic, low, and high. Low and high are only suitable for driving in heavy rain, which means that if I want my wipers to be active at any speed that involves a pause between wipes, they need to be set to “automatic.” Unfortunately, the rain-sensing tech just isn’t there. I can adjust its sensitivity, but even on the lowest setting, most of the time it’s simply too fast, though occasionally it will wait until visibility is nigh-zero to finally activate. That inconsistency and the fact that there is no set rhythm to the wipers, which I prefer, is an unwelcome “convenience.” I prefer control.

But besides those two pet peeves, I’m quite happy with the car. It suits my needs perfectly, it’s fun to drive, it’s comfortable and spacious even for a tall individual such as myself, and even after having driven a very similar-looking car for over three years, I still don’t get tired of looking at it.