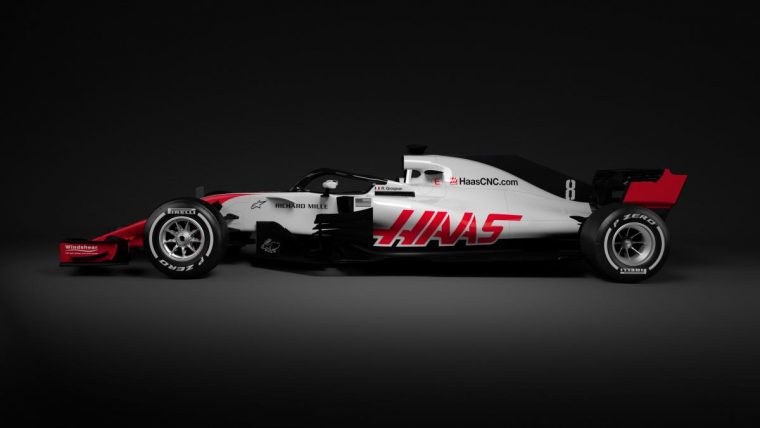 As of last week, the America’s only Formula One team, Haas F1, was the only team in the sport not to have announced when it would reveal its new 2018 car. Perhaps this was for dramatic effect, as the VF-18 was just revealed today, without announcement, before any of the others (the Williams FW41, which had been first on the list, launches tomorrow).

The VF-18 shows the first official integration of the halo device to an F1 car as well as a drastic reduction of the sharkfin, which had mostly existed last year as a result of a loophole in the regulations.

“The biggest part of the car’s evolution was the addition of the halo,” said Guenther Steiner, team principal, Haas F1 Team. “It took quite a bit of study by the aerodynamicists, but the designers had to work hard to modify the chassis so the halo could survive the mandated loads. The total minimum weight of the car increased because of the halo, and there’s a higher center of gravity simply because of the halo’s position. But, everyone is in the same boat.”

Buying CPO: Why is it preferable to buying used?

The press release for the car launch makes clear that Haas’ involvement in F1 is strongly motivated by advertising potential for Haas Automation, one of North America’s largest machine tool manufacturers. “People see what we can do in Formula One and people believe Haas Automation can build world-class machine tools,” said Gene Haas. “Being a Formula One participant brings a level of credibility that you just won’t get through traditional advertising.”

Even the “V” in the VF-18’s name is a reference to a machining production standard and the livery is based on Haas Automation colors. “The livery is a little bit of a return to what we had on our first car, the VF-16,” Steiner said. “Its look is clean and precise, just like the machine tools made by Haas Automation.” Ha!

Make It Like New: 4 ways to spruce up your car