Unraveling the Greatest Conspiracy Theory of Our Time 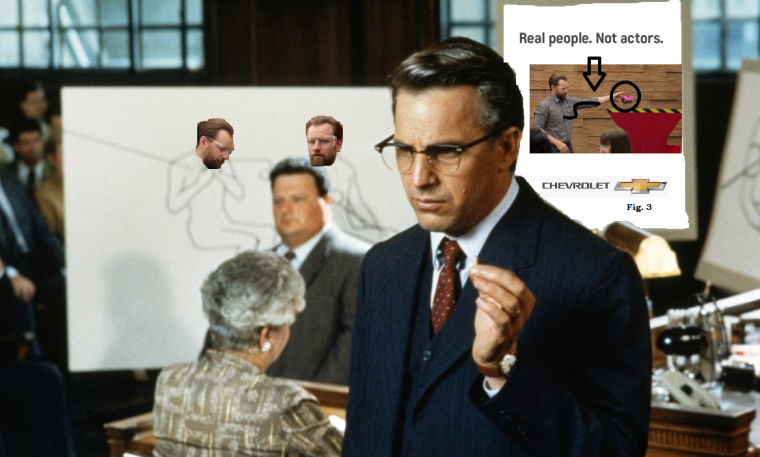 If you own a television and use it with semi-regularity, you are probably familiar with Chevrolet’s latest marketing campaign, “Real People, Not Actors.” As the name implies, this series of ads makes the controversial claim that “Real People” and “Actors” are two mutually exclusive groups, while also maintaining that Chevy’s car commercials feature only the former and none of the latter.

In most of these ads, a group of real people who are real dumb are gathered together to be part of a focus group, which is led by a soft-spoken, sandy-haired man with a handy clipboard and even handier smug sense of superiority.

The latest entry is a Fargo-inspired bit called “Woodchipper,” in which our familiar focus group leader collects the smartphones of everyone present before casually dropping them into the titular power tool. If you aren’t familiar with the ad (or have only seen the 30-second TV spot, and are eager to sit through the full-length 2:23 version), check it out:

I didn’t think too much of this video at first blush, until I watched the Spanish-language version, which has the more sensual-sounding title “Conexión” (car commercials are always sexier in Romance languages). It uses the same set and premise as the English-language “Woodchipper” ad, but instead features a focus group composed entirely of Spanish-speaking real people (or rather, “persones reales”).

At the time of writing, the top comment on “Conexión” is from YouTube user 1theqtpie, who last week complained, “[these are] the same cellular phones as in the English version this [is a] fake marking reaction.”

An explosive accusation, to be sure—but was it slander, or was 1theqtpie the “Deep Throat” of YouTube commenters? I had to find out.

So I did a visual comparison of the smartphones featured in both ads, to see if Chevy was indeed recycling “props.” These were the results: 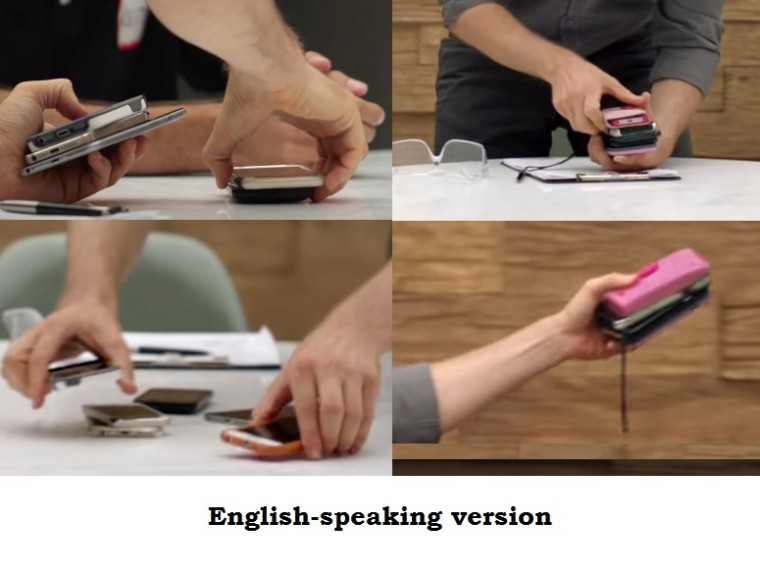 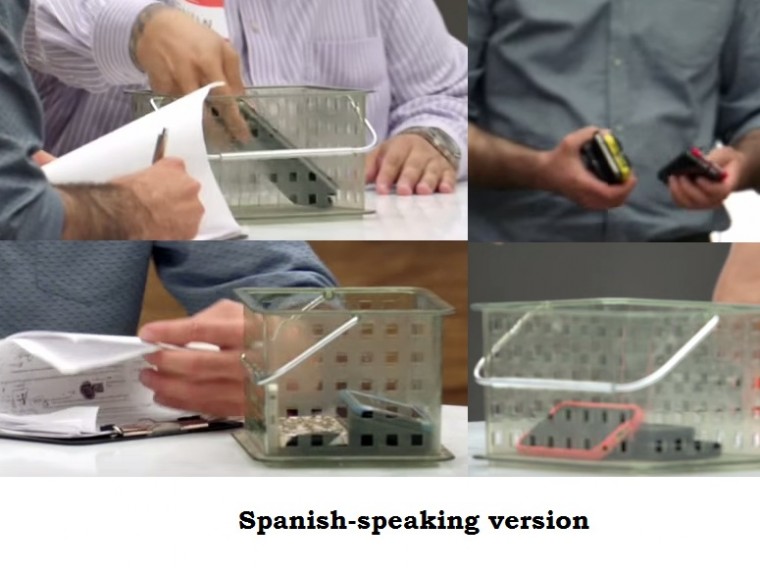 So yeah, looks like that was a pretty big waste of time. There are clearly no visible crossovers, and I’m not sure I’ll ever trust a news tip from 1theqtpie again.

Clearly, Chevy was playing fast and loose with the editing; splicing reaction shots from the Spanish-speaking focus groups into the English-speaking groups.

It wasn’t proof of false advertising, per se, but it did suggest a casual disregard for verisimilitude that encouraged me to dig deeper. I wasn’t about to end the investigation after comparing only two commercials—after all, Chevrolet has been running this marketing campaign since the beginning of 2015, so there was quite a bit of evidence for me to sort through.

After poring over hours of film, I finally found my smoking gun: the Lady in the Blue Dress.

Take a look at this ad for the 2015 Chevy Colorado, entitled “Sexier,” which encourages men to buy pickup trucks as an act of conspicuous consumption:

Did you see the Lady in the Blue Dress who points and says “Truck” at the 12-second mark? That’s Kelsey Bohlen, who you may (but most likely won’t) recognize from low-budget films like Men in Suits, Jew in Choctaw Country Pt 3, and the television mini-series Gettin’ It.

To be fair, Kelsey does also appear to be a real person. She grew up on a horse ranch in Texas, competed in rodeo events like barrel racing and pole bending as a child, was voted Best Dressed in high school, and got a degree in Broadcast Journalism from the University of Texas in Austin back in 2012—all of which sound like the kind of things that a real person might do.

But I gathered all of these facts from the mini bio on her IMDb page, which explicitly identifies her as an “Actress.” She even had a demo reel, which included her appearance in the “Sexier” ad as a highlight of her acting career. (The video is no longer available.)

After making this startling discovery, I reached out to someone in GM’s Advertising and Promotions department, and got this response:

I’m going to check, but I’m pretty sure her being an actress is a coincidence. We did the shoot in the LA area and recruited like we would for a typical focus group. Chances are likely that we’d get a few aspiring actors in the mix there.

Hmm… As much as my inner-conspiracy theorist wants to cry “cover up,” this is a fairly plausible excuse. After all, Los Angeles is filled with aspiring actors—it would almost be more suspicious if a random sampling of ten LA-area women didn’t turn up at least one would-be starlet.

But what about the other ad for the 2015 Colorado, “Pets,” in which a group of children are asked what type of domesticated animals they think a truck guy would have?

Guess what—not one, not two, not three, but all four kids in this ad are child actors!

“Norton,” the boy in the green shirt who thinks the truck guy would own a German Shepherd? That’s Norton Leufven, who appeared in the 2013 film Wrong Cops, alongside Marilyn Manson and Tim and Eric’s Eric Wareheim! 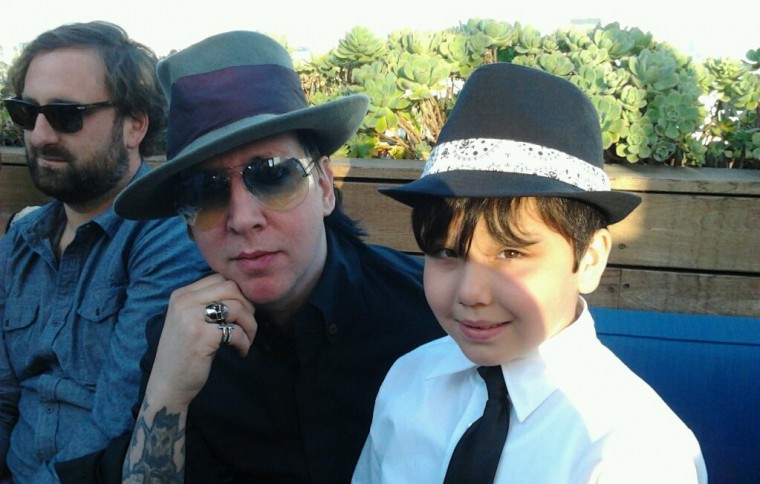 What kind of “real person” hangs out with Marilyn Manson and Eric Wareheim?

“Noah,” the kid who thinks that lame compact car drivers own pet birds? That’s Noah Kaye Bentley, who has appeared in TV movies like Reading Writing & Romance and Escape from Polygamy!

“Aliyah,” the girl who thinks the truck guy might favor a tarantula? That’s Aliyah Conley, who you probably remember from her uncredited role as “Fantasy Daughter” in the 2013 classic Baggage Claim—and if you doubt the validity of her acting career, just wait until you get a load of the flawless British accent she uses in this demo reel:

“Haley,” the girl who thinks truck guys have pet rattlesnakes? That’s Haley Lyn Gilchrist, who played Susie Rogers on the third episode of the seventh season of Mad Men—which is actually a famous show, for God’s sakes!!!

Presumably, Chevy’s excuse for the preponderance of child actors in “Pets” is that they were recruiting for kids in the Los Angeles area, and in Hollywood, the parents most likely to be pushing their children in front of cameras are hungry “stage moms” and “stage dads.”

But if the entire point of your marketing campaign is that the people featured in it are “Not Actors,” shouldn’t you go to some effort to ensure that the random focus group members you recruit are, in fact, not actors? If the NCAA was this lax about its “Real Students, Not Professionals” rule, we might see Kobe and LeBron suiting up for UK next season.

At least five confirmed actors have appeared in Chevrolet’s “Real People, Not Actors” commercials. Perhaps they were all sincere mistakes. Perhaps Chevy knew more than it let on. Regardless, I feel that a certain trust has been broken, and I can no longer watch these ads and suspend my disbelief.

I can’t believe I’m saying this, but Chevy… just bring back the stupid emoji commercials. At least back then I just felt like I was being condescended to, not lied to.

UPDATE: After this article’s publication, GM got back in touch with us with the following response:

Because we are calling this campaign, “Real People, Not Actors,” we were very diligent in our recruiting process and asked participants if they were actors at two separate points. Once when they were initially recruited and again when they arrived for the focus group.

The participants were recruited in the L.A. area, which increased the chance that participants had acting experience. We had each participant or their guardian sign a document that they were not currently a member of the Screen Actors Guild.

To recruit participants, we followed the same process that lots of marketing firms use to recruit for focus groups. Their responses were never scripted and they were never told that Chevrolet was the client. They were not told that their focus group would be used in a commercial until after the final cut was made.