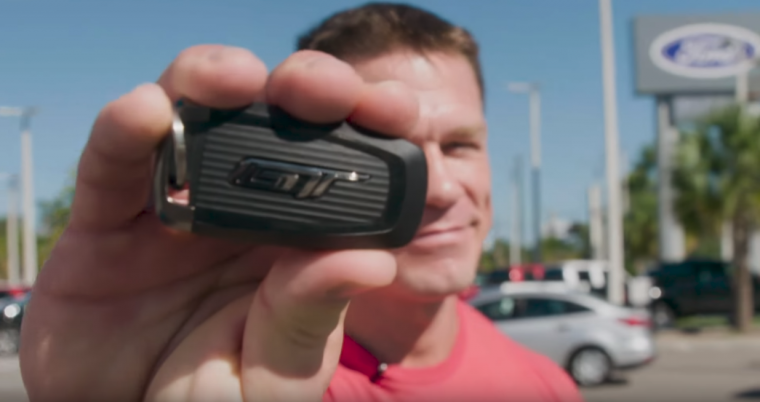 Stop me if you’ve heard this one before: professional wrestler purchases a $400,000+ supercar, decides he wants to sell it, and is promptly sued by the automaker.

Such is, inexplicably, the tale of John Cena and the Ford Motor Company

According to TMZ Sports, the 16-time world heavyweight champion is being sued by Ford for violating the terms of a contract he signed upon purchasing his 2017 Ford GT. Turns out, Ford not only made interested parties apply for the right to own a GT, but the chosen few were then contractually obligated to keep the car for no less than two years.

Cena apparently decided he would prefer to no-sell that particular clause like it was a Nexus beatdown and opted to sell his Ford GT shortly after taking delivery of it—but not before filming a video for his YouTube show wherein he championed it as being incredibly fun to drive, going so far to insinuate that it’s pee-pants worthy. Are we to believe then that John Cena is also kayfabing his fans in his John Cena: Auto Geek YouTube series? Where does it end, John? What will Justin Verlander think of this?

A Ford spokesperson told TMZ: “Mr. Cena has unfairly made a large profit from the unauthorized resale flip of the vehicle, and Ford has suffered additional damages and losses, including, but not limited to, loss of brand value, ambassador activity, and customer goodwill due to the improper sale.”

Cena, in response to the suit, said that he sold the car in order to pay some bills. Ford wants the profit he made from the sale of the Ford GT in addition to damages. The idea of taking this to court seems a difficult prospect for Ford, given that even its expert legal team would have a hard time winning a case against a defendant that no one can see.

Might I suggest that this be settled by having Jim Hackett or Bill Ford challenge Cena to a Hell in a Cell match? Word of advice, though: the guy doesn’t give up, so maybe don’t spend too much time on your submission game.

Or, maybe John could just avoid the lawsuit altogether by faking his own death. After all, it wouldn’t be the first time he’d be rumored to have died before his time.