Behind the Badge: The Forgotten Hyundai Equus Logo & Its Deceptive Design

With the transformation of the Hyundai Genesis and Hyundai Equus into the Genesis G80 and Genesis G90, respectively, these models are getting a new shot at success. As Hyundai’s luxury sedans take on the brand name of the Genesis to form their own lineup, the Equus though has become overshadowed by the Genesis legacy.

To honor the underappreciated run of the premium Equus, let’s look back on the model’s peculiar identity.

Taking Flight: A Closer Look at the Odd Equus Logo

The Equus name might remind you of the term “equestrian,” concerning horseback riding, and that’s because the Latin term “equus” in fact refers to the genus of mammals which includes horses (and donkeys too, unfortunately for Hyundai). 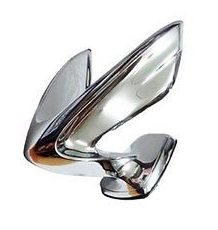 The correlation between cars and horses is not uncommon, thanks to models like the Ford Mustang and the “horsepower” metric. It’s not a stretch for Hyundai to have used that correlation in the design of the Equus’ badge. You’d be surprised, then, to see the Equus’ emblem doesn’t resemble a horse, but rather a bird.

Intent on differentiating the high-luxury Equus from the rest of the “affordable family car” lineup, and thus not bearing the stylized H badge of Hyundai, the Equus sported its own badge until its retirement in 2016. As its own premium brand internationally, the Equus followed the far-overused theme of luxury vehicles and winged logos (e.g. Bentley, Aston Martin, Chrysler).

The first-generation Equus sported an actual hood ornament of a silver, nondescript winged figure in some ways resembling the Rolls Royce ornament with all the details smoothed away. For the second generation, the Equus’ 3D ornament became a 2D badge, adapting the winged shape into a logo. What made it unusual was its square shape, as most winged designs were thin and horizontally long; the Equus logo oddly bore a resemblance to the Romulan logo in Star Trek: Nemesis.

While many people mistake the Equus emblem for being a bird, it’s actually a Pegasus, the mythical winged horse.  While that concept for an emblem is clever, it hardly translates to the hood ornament or the badge.

Love reading about logos like the Equus? Check out the rest of our Behind the Badge series examining fascinating automotive logos!

Affordable Luxury: Check out what the Genesis G80 has for you