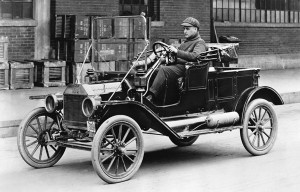 Although the city of Detroit is the butt of many jokes, it really only takes a closer look to find some of America’s hidden gems in this city.  One of which is the Ford Piquette Plant – the birthplace of the Model T.  The plant was opened just a year after Henry Ford founded the company, but it was not always seen as the landmark it is today.

The factory was scheduled to be demolished in the 1990s before a dedicated group of volunteers with financial backing stepped in to restore it.  They were able to reopen the plant in 2005, but it would no longer be pumping out Ford vehicles.  Today, the Piquette Plant serves as a museum to highlight the early accomplishments of the global automaker.

The plant now employs the help of nearly 700 volunteers whose expertise and knowledge of Ford is expansive.  The Piquette Plant was listed on the National Register of Historic Places in 2002, named a Michigan State Historic Site in 2003 and earned the distinction of being designated a National Historic Landmark in 2006.

The Ford Piquette plant was saved from the wrecking ball, but unfortunately, not all historic buildings are so lucky.  Do you remember any places that were destroyed or shut down that had a special significance to you? Please share with us in the comments section!