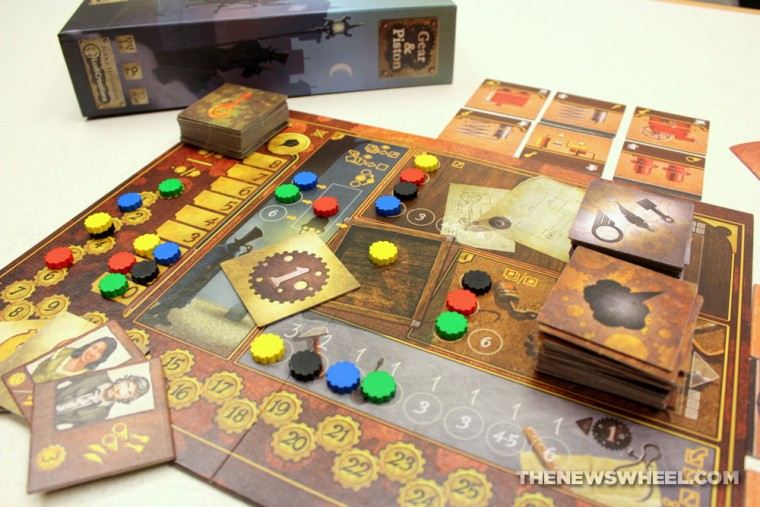 There are few automobile-themed tabletop games out there that aren’t racing or trivia-based—and Gear & Piston is one of those few exceptions which look at automobiles in an entirely different way. Finnish designer Jjukka Höysniemi takes the theme of car assembly and transposes it to a fascinating time in history, even constructing a narrative scenario around it.

Set in the early years of automotive design, Gear & Piston is a clever worker-placement, tile-building board game that was originally funded via Kickstarter and won the 2012 Lautapelaamaan Finnish game design competition.

Modern-Day Racing Games: Our review of the official Fast and Furious board game 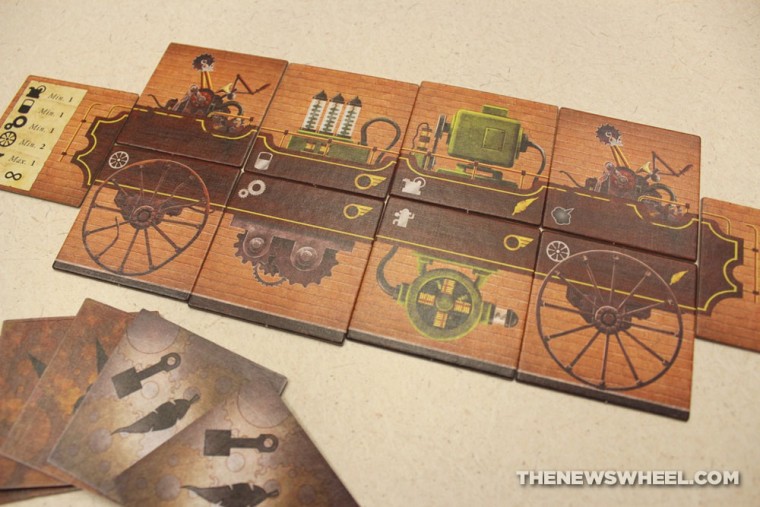 The year is 1888 and you’re a lowly, hard-working engineer. To win Gear & Piston, you must create a better “horseless carriage” (i.e. automobile) prototype than your opponents and thus score the highest amount of points.

Each round of gameplay involves two basic phases: planning actions and resolving them. Players lay claim to what actions they will take on a given round by placing their gear-shaped tokens on the board. The board is divided into sections relating to the different possible actions a player can take; these all involve different ways of obtaining and laying car part tiles of varying quality. Once all players lay their tokens, the claimed actions are resolved by players in a given sequence, choosing and placing tiles to build their car. Then, the round begins again.

During gameplay, participants must be wary of expectations set by potential investors and the basic requirements to construct a functioning automobile.

Once one player assembles a car involving 12 tiles or a stack of tiles runs out, the game ends. Unfulfilled requirements are met by adding junk part tiles to each car. Finally, points are calculated and the winner is announced. 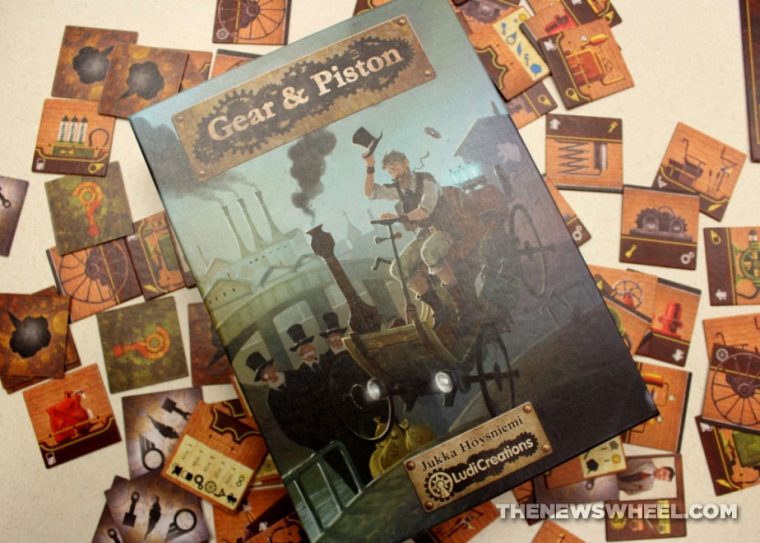 Gear & Piston also has 3 mini-expansions not included in the base game: Engineer Assistants, Overheated, and The Americans.

When you first hold the box, you might hear rattling inside. That’s the tiles which have loosened from their cardboard frames—they’re very easy to punch out just by shaking them. Once you open the box, it’s easy to remove and sort all the playing pieces. They’re easy to identify by category based on their unique backings.

The quality of the components is tremendous. The fact that sturdy cardboard tiles are used instead of flimsy playing cards is worth the cost of the game and truly adds to the substance of the theme. It also makes assembling the car a cinch without having to worry about cards scattering.

The game board—divided into the scoring, the volatility, the Back Alley, the Patent Office, the Junkyard, and the Workshop—is well laid out with clearly-defined sections and picto-explanations. The artwork on the game board also enhances the theme. The entire game has a grungy, rusty palate to its design that some might find bland but others appreciate for its nuanced retro style.

The box layout itself could use the most work. The tiles shuffle around loosely in the box without any frame or dividers to hold them in place, which is especially problematic as the game is printed to stand upright. I used rubber bands to keep the tiles secured and a small baggie for the gear tokens. 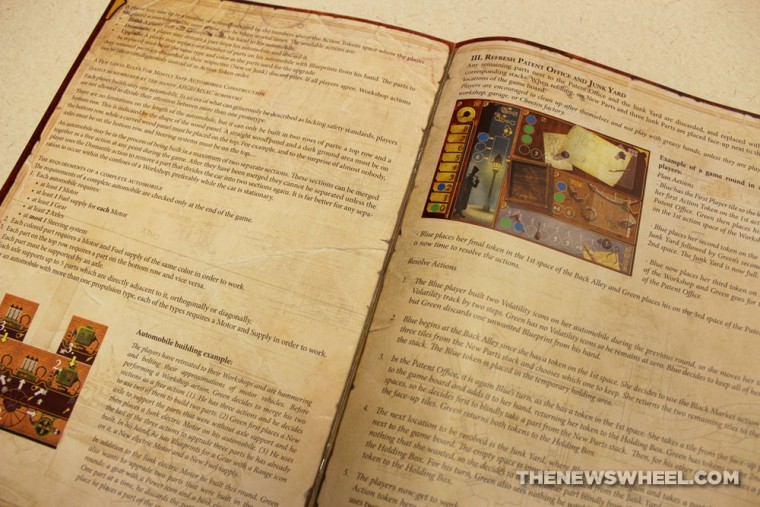 To properly learn and teach Gear & Piston, it’s crucial that you read the directions beforehand. Fully grasping the setup, mechanics, and goal of the game is not something you can do on the fly. There are a lot of nuances to the gameplay that you need to understand in advance. Reading through will take you 30-45 minutes, as the hefty instruction booklet is largely text-based (and could use more explanatory diagrams). This makes the game easier to teach to the other first-time players.

Plus, the directions are written with verve and wit that makes them fun to read. There are, notably, multiple points of widespread confusion in the instructions (like what the wrench icons mean or the purpose of upgrades), but clarifications on these can be found on online forums like Board Game Geek.

Teaching Gear & Piston to others takes about 15 minutes, depending on how familiar participants are with worker-placement, Euro-style games like this. Be prepared to pass the instructions around during gameplay for everyone to clarify what the tiles and their symbols mean. Game components are adorned with symbols rather than text, which might appeal to those who can’t/don’t like to read but won’t appeal to those who prefer having everything in front of them explained in detail.

Scoring was the most difficult aspect of the game to master. I and the other players had difficulty counting up “continuous areas” (which parts are neutral? Are all neutral parts grey?). However, problems with the scoring of the game don’t detract from the fun of actually playing it.

Our recommended approach is to stage an example round with all the players before beginning to learn through practice. And, build an example car to show how final scoring would work.

On the Open Road: We recommend this fun cargo-moving, cross-country trucking board game 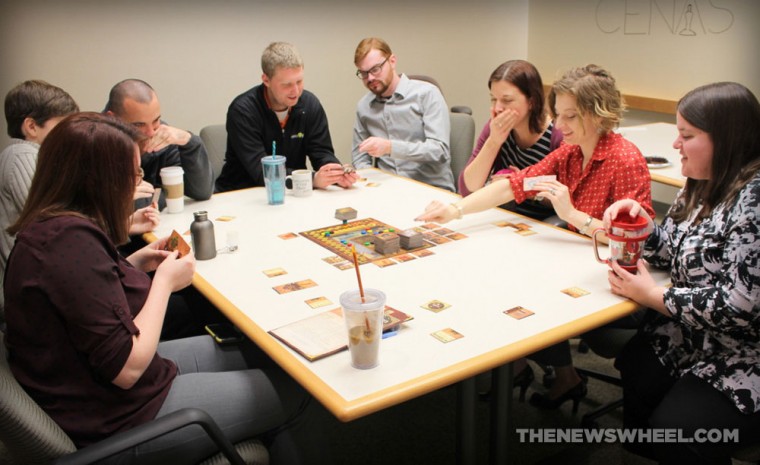 This isn’t just a niche game with an unusual theme—it’s a lot of fun for most people to play because of the moderate strategizing and indirect competitive options (stealing via the Back Alley, bumping opponents’ tokens, and snatching tiles that are in high-demand). Still, the theme of building an old-fashioned car and the artwork that accompanied it elicited strong positive responses from the test team.

The first round of play took a while for everyone to understand, but subsequent rounds took merely a few minutes. It was a challenge to balance how fast to build our prototype car with how high a score it earned us. At the end, all our scores were incredibly low, with the winning player earning only two points. We played a couple more times and rarely achieved our victory point goals. This isn’t a game you’ll master on your first or even second time playing, and that might frustrate some players. Because of that, be ready to play this game a couple times in a row before participants feel satisfied. For me, I think that’s a sign of a good game—compelling people to play again rather than give up afterward.

That struggle may have been because it’s hard to get everything you need completed in time when you are playing with five or six people. So the ideal number of participants in probably three, when each person gets to use 4 tokens (instead of limited to 3).

The role of the investors is a welcome aspect that increases replay value as they change not only the final scoring but everyone’s strategy leading up to it. We did not play with the expansions, which were not included in the set we received, but I would be very interested to see what challenges they offered. 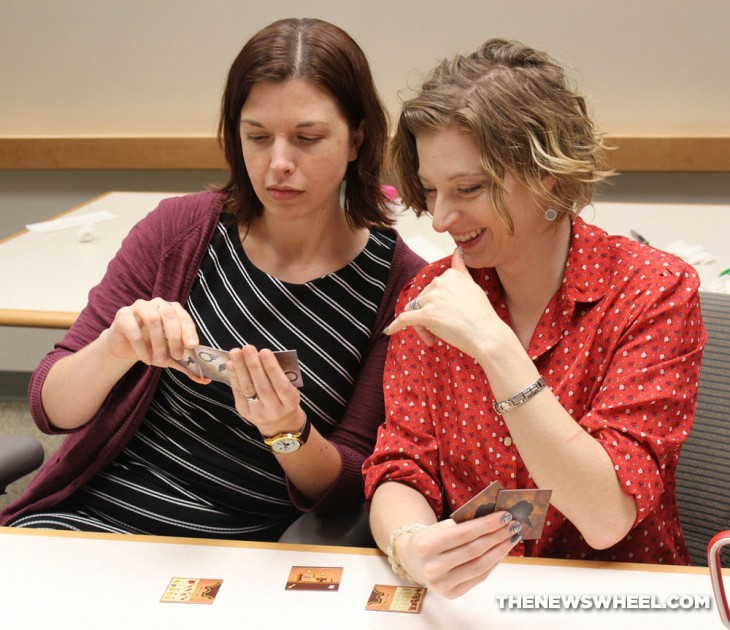 Despite its flaws, Gear & Piston is still a lot of fun to play. I could see becoming one of my favored gateway games to bring to parties.

My personal thanks to LudiCreations for supporting and distributing games with unique themes and appeal such as Gear & Piston. It’s refreshing to see an automotive-themed game like this receive such high-quality construction and wide release.

Limited quantities of Gear & Piston are still available through Amazon and local gaming stores in the USA.

To learn about future printings, sign up for LudiCreation’s newsletter.