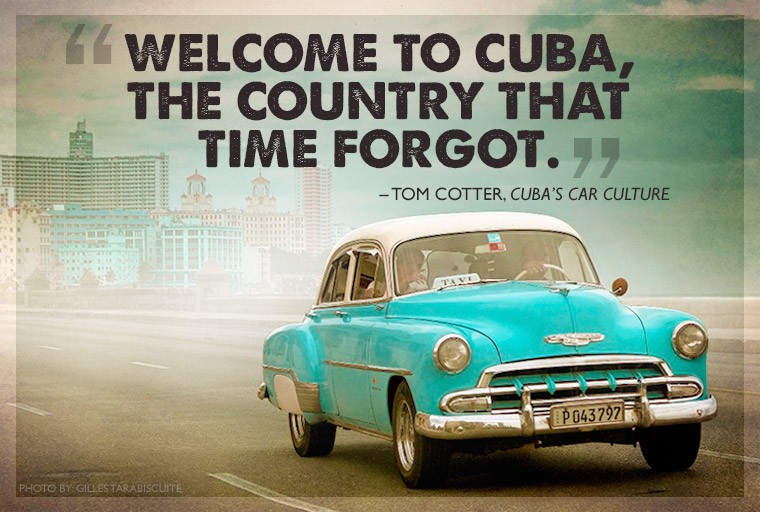 Cuba has a certain air surrounding that is an odd mixture of excitement, color, and mystery. There is a vitality of life within Cuban culture that is evident even to those who have never been to the country. It is this vitality that is captured in Tom Cotter and Bill Warner’s Cuba’s Car Culture.

It’s no secret that the streets of this island are littered with classic cars, ranging from Oldsmobiles to Chevys, from Plymouths to Fords. Stepping foot on the island is akin to enjoying your local classic car show—but better. Because these vehicles aren’t shiny and new-looking. Instead, they have the beat-up look of a book that has been read over and over again, showing that not only are these vehicles loved, but they are actually used in day-to-day life.

Between its hardback covers, Cuba’s Car Culture brings its readers back in automotive time, while showcasing the lifestyle of Cubans. Tom Cotter, one of the book’s authors, went to Cuba for the first time in 2009 with his photographer friend and co-author Bill Warner. By the time the duo returned for the second time in the summer of 2015, they decided it was time to write a book about the country’s car culture—and so they did.

Trekking throughout the island, Cotter conducted interviews through translators and delved into Cuba’s unique culture, while Warner spent his time behind the camera, capturing the number of beautiful, colorful, and enlightening photographs that are featured within the book’s pages. By writing about the past, present, and future of Cuban cars, these two men allow readers to better understand the effect of the Cuban trade embargo on the country as a whole and its resulting array of vintage vehicles.

Cuba’s Car Culture is set for publishing on October 1, 2016. Make sure you check back for a review of this book then.