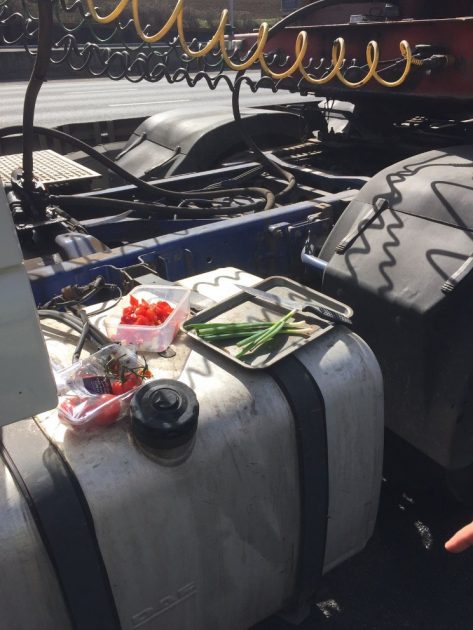 From scattered Skittles on the roadway, runaway unicorns, and baby getaway drivers, the staff of The News Wheel has heard of a lot of vehicular crimes in our tenure covering the auto industry. One particular ticket came across our desk this month that we could not resist covering, and that is the case of the truck driver ticketed in Great Britain for making a salad.

You read that correctly. According to BBC News, a truck driver in Great Britain stopped on the shoulder of the M25 in March for a break behind the wheel. While he was out stretching his legs, the driver decided to start preparing his meal. Using his fuel tank as a counter top, the lorry driver commenced chopping up tomatoes and onions. He was stopped by police, who then gave him a ticket for the food prep. It was not because they were critiquing his chopping style, but rather because hard shoulders in the UK are only reserved for emergency stops, not rest breaks.

The hardshoulder of the M25 is probably not the best place to start preparing your dinner. pic.twitter.com/Q6EyDJX1jF

After the traffic stop, the police tweeted about the incident, commenting that the shoulder of a major motorway is not a great kitchen. The reply tweets began to stream in from around the world, ranging from people chuckling at the unsanitary fuel tank being used as a kitchen counter to angry users saying that the driver should not have been fined.

We’re sure that Gordon Ramsay and the rest of Britain’s cooking elite would look down on the humble salad, but we have to give this truck driver serious props for trying to stay somewhat healthy while driving. I mean, when we take road trips we end up piling the car full of candy and salty snacks. Maybe next time he can just pull completely off of the highway to avoid the culinary police.