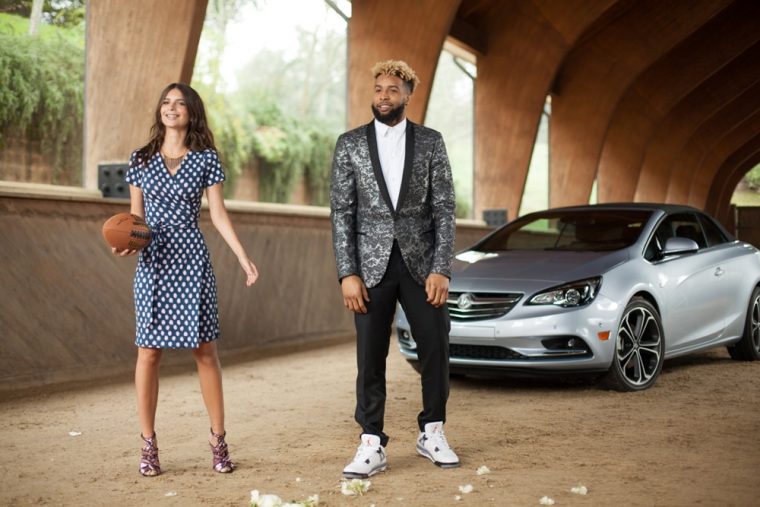 Buick is continuing with the attempt to rebrand itself as a cool and hip automotive brand by doing something it’s never before.

Buick will run a commercial during Super Bowl 50 and the ad will star model Emily Ratajkowski and NFL player Odell Beckham Jr.

Looking For a New Buick? Check out all the features and specs of the ’16 Verano

The much anticipated commercial will continue with the brand’s award-winning “Experience the New Buick” campaign and it will be the first new Buick commercial of 2016.

With three new vehicles launching this year, there was a lot of speculation about which vehicle would be featured in Buick’s new commercial, but a recent press release confirmed it will be the new Cascada convertible starring alongside the wide receiver and supermodel.

The 2016 Buick Cascada comes equipped with a 1.6-liter four-cylinder engine and six-speed automatic transmission, which combine for 200 horsepower and 206 lb-ft of torque. Other notable features of the Cascada include 20-inch alloy-wheels, Buick’s new IntelliLink navigation system, and 4G LTE WiFi.

The Cascada is Buick’s first convertible in 25 years.

“With sales surpassing 1.2 million vehicles globally for the first time ever in 2015, the Buick brand has never been stronger,” said Aldred. “Super Bowl 50 represents a perfect opportunity for us to showcase our newest vehicles in a spot that delivers a mix of light-hearted humor and star-power to a global audience of millions of consumers.”

Be sure to look out for Buick’s new commercial during Super Bowl 50 on February 7th.

Did You Know? Buick’s new Envision compact crossover is coming to the United States this summer