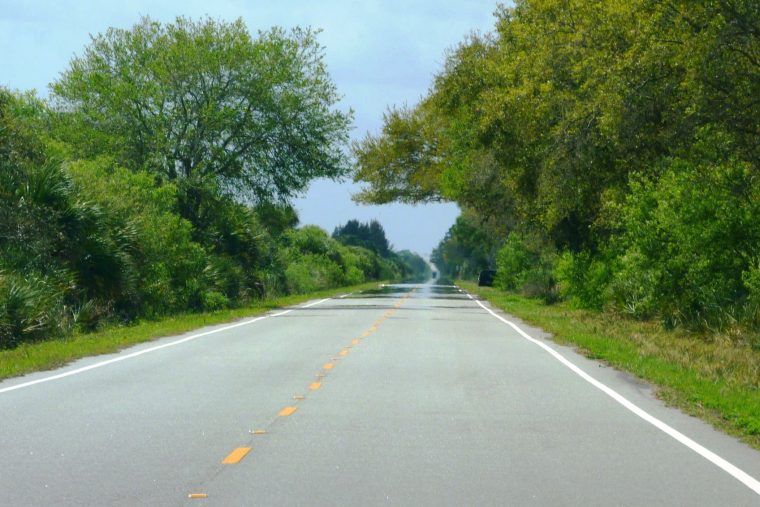 Here’s why the road looks like it’s wet
Photo: via cc

When the weather gets hot, so does the black surfaces of our roads and parking lots. Their dark color soaks up the sun ray’s and holds on tight. To help reflect light off of the streets and hopefully cool the air around them down, Los Angeles is painting some of its streets a brilliant shade of white.

Los Angeles isn’t just dumping a bucket of paint on the streets, either. Guard Top manufactures the special coating, called CoolSeal, and when it’s applied correctly to asphalt it reduces the heat it soaks up. In a video demonstration for CBS News, a heat gun read the temperature of the street at about 110 degrees, but on a street covered with CoolSeal the reading dropped about 12 degrees to 98. That was also with one coat of the white paint on the street, when the finished process has two coats, so the cooling effect can only improve.

Los Angeles is painting some of its streets white and the reasons why are pretty cool https://t.co/wogDFdir3N pic.twitter.com/tZfFJkqzvz

The city of Los Angeles and Guard Top hope that CoolSeal can help fight the urban heat island effect, where a high concentration of roads and other paved surfaces in a highly-populated area heats up a city’s air. The EPA estimates that the effect can raise air temperatures by as much as 22 degrees compared to the surrounding environment. If painting the streets white does help lower surrounding air temperatures, nearby homes and buildings won’t have to use as much energy for air conditioning.

Move Off The Road: This Nissan sings to tell you to get out of its path

While CoolSeal sounds like a great idea, it might not be for every city. LA estimates that it’s costing the city $40,000 for every mile it covers with the substance. However, if it truly accomplishes what it sets out to do, it’s possible that the idea of lightening up the streets will catch on.