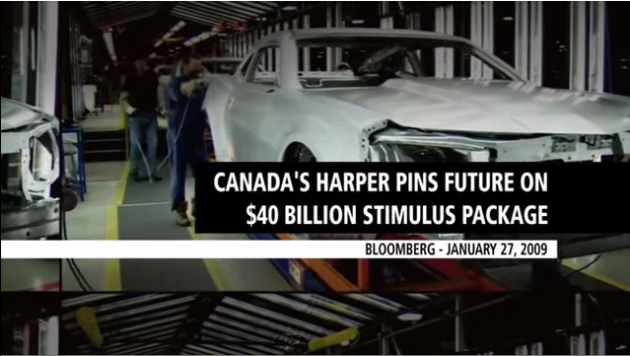 In the Canadian Conservative Party’s latest campaign ad for the reelection of Prime Minister Stephen Harper, we see a montage of news stories that broke during Harper’s time in office, which began in 2006.

At one point, we see a 2009 headline from Bloomberg, “Canada’s Harper Pins Future on $40 Billion Stimulus Package,” superimposed over a shot of assembly line workers building a fifth-gen Chevy Camaro. It’s meant to act as a reminder of the good things Harper has done to create new jobs in Canada.

There’s just one problem, though: the Camaro’s future in Canada, much like Harper’s, is less than certain.

With the arrival of the sixth-gen Camaro, assembly line production of the vehicle is set to move from the featured Oshawa Car Assembly in Ontario, to GM’s Lansing Grand River Assembly in Michigan. That will bring 500 more jobs to Lansing, but will cost Oshawa about 1,000 jobs.

As one might expect, Harper’s liberal opponents were quick to highlight the perceived gaffe, blasting the incumbent PM as “completely out of touch.” General Motors, though, is defending the ad.

“We’re still doing an awful lot here in Canada, and I’m awfully proud of it,” GM vice president David Paterson told CBC News. “The plant wouldn’t be there were it not for the leadership of the Conservative government in 2009. They basically saved General Motors, and I think they deserve a bit of credit for that.”

Paterson also pointed out that the new 2016 Camaro’s engine will still be produced in Canada. Perhaps it would have been a good idea to use some stock footage of a motor on the Oshawa assembly line, rather than a Camaro, which will officially cease production there on November 20, 2015.

Still, if there’s one thing we’ve learned in the past few months, it’s that politicians and Chevy muscle cars don’t mix.