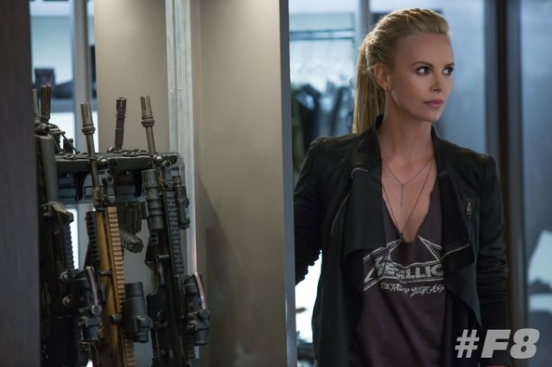 Charlize Theron will be the newest villain in the Fast & Furious franchise
Photo: Twitter

There are few women in the industry that are as versatile as Charlize Theron. Despite the fact that the South African native is stunningly beautiful, she’s performed in a myriad of roles, ranging from the evil queen in Snow White and the Huntsman to Will Smith’s wife in the action comedy Hancock.

And, thanks to Mad Max: Fury Road and The Italian Job, we know that she looks absolutely badass while driving a fast car.

So, really, does it come as any surprise that the Furious 8 Twitter page revealed that the versatile Charlize Theron will play a villain in the newest installment of the Fast and the Furious franchise?

No, not it doesn’t. But that doesn’t make us any less excited.

Based on the Twitter pic (check it out below), Theron’s character will be named Cipher and will be a weapons expert of some sort. At least, that’s what we can gleen from the fact that the caption states, “Our crew has faced former military, mercenaries & more. Now they meet Cipher.”

We already know that Jason Statham is going to reprise his role as Deckard Shaw in Furious 8, so Charlize Theron won’t be the only villain. It will be interesting to see how the two baddies in the film interact, though. Hopefully, we can get even more awesome explosions and crazy stunts than usual.

Along with the news of Theron’s role, the franchise has let us know that Scott Eastwood, the son of Clint Eastwood, will also star in the new film. It’s set to take place mostly in New York City, but there will also be some scenes taking place in Cuba.

Please, if there is a god, let that mean there’s going to be some souped-up classic cars involved in the film’s chase scenes.

Directing of Furious 8 will be handled by F. Gary Gray, who actually directed Theron before for the 2003 The Italian Job. Keep an eye out for more info on the franchise’s newest film over the next year, since it’s not set to release until April 14, 2017.