With assistance from data scientist Randy Olson, Chevrolet has assembled an itinerary to reach 48 of the country's most popular tourist attractions in the span of one trip 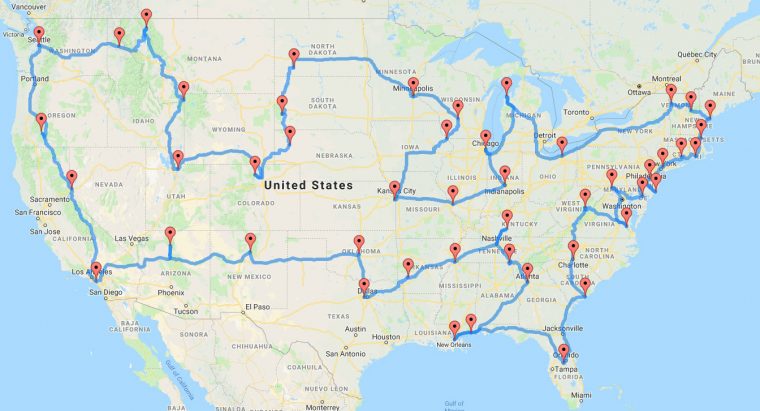 According to Chevrolet, this is the most efficient cross-country route you can take

Planning a spring break trip can be complicated for a number of reasons. This is especially true if your upcoming spring break plans involve a cross-country road trip.

If you want to make the most out of your road trip in the least amount of time, then Chevrolet has you covered. The automaker recently teamed up with data scientist Randy Olson to create the optimal route for a 48-state road trip.

Obviously, this cross-country excursion excludes the states of Hawaii and Alaska. However, the rest of the nation’s states are included on the route.

Also included on the route are 48 of the most famous family attractions in the country, averaging about one stop per state. Such excursions include the Rock and Roll Hall of Fame Museum in Ohio, Colonial Williamsburg in Virginia, Graceland in Tennessee, the Grand Canyon, Yellowstone National Park, and both Disneyland and Walt Disney World.

Double the Disney, double the fun!

These locations were selected to satisfy what Chevrolet states are families’ two favorite aspects of road trips. According to a survey that the automaker conducted, these two aspects are the ability to spend time with family and the opportunity to explore new and interesting locations.

The route was strategically assembled to create the least amount of backtracking during the journey. As such, it presents the most efficient routes between each destination.

“This map is designed so road trippers can start anywhere and drive as much or as little as they like,” explains Olson. “Across the U.S., people can create their perfect route, whether staying close to home or embarking on a once-in-a-lifetime 48-state journey.”

Of course, road-trippers will need an extra-long spring break if they hope to complete this odyssey in one go. The route is estimated to take 214.56 hours, or right around nine days, to complete, and that’s before a recommended eight hours of sleep each day is accounted for.

Furthermore, the road trip won’t be easy on your vehicle either. Once the journey is complete, approximately 13,389 miles will have been added to your vehicle’s odometer.

If you’d like to take a smaller excursion across the region of the country which you call home, Chevy and Olson have also assembled separate routes limited to the Midwest, Northeast, West Coast, and the states of Texas and Florida. On the other hand, if you have more than 214 hours to spare, then you can utilize this map to set out on the most epic family road trip of all time!