In spite of Honda’s best efforts, guns kill more people than cars in America now, according to data compiled from the US Center for Disease Control. Thanks to better tech, better laws, and a decrease in the number of young people driving, the rate of automotive deaths has been declining for years. Meanwhile, firearm deaths by suicide, accident, and domestic violence (the three leading causes of gun fatalities) have been trending in the other direction.

Analyzing CDC data, the Center for American Progress concluded that 2015 will be the year that annual gun deaths surpass annual motor vehicle deaths for people under the age of 26, for the first time in two decades. 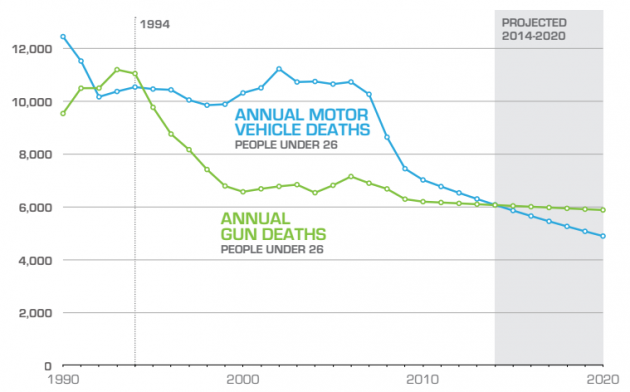 Bloomberg Government, using the same data, has concluded that “by 2015, firearm fatalities will probably exceed traffic fatalities for the first time” for all age groups. 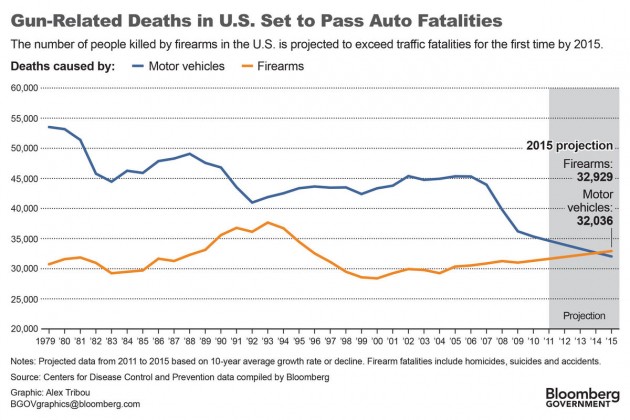 The London-based Economist notes that this statistic really resonates with Americans, who are forced to compare the number or casualties caused by “the two national icons, cars and guns.” (Aw, really Europe, is that how you see us? Why can’t America’s two national icons be cars and… baseball? Or jazz? Or pizza with cheese baked into the crust?) 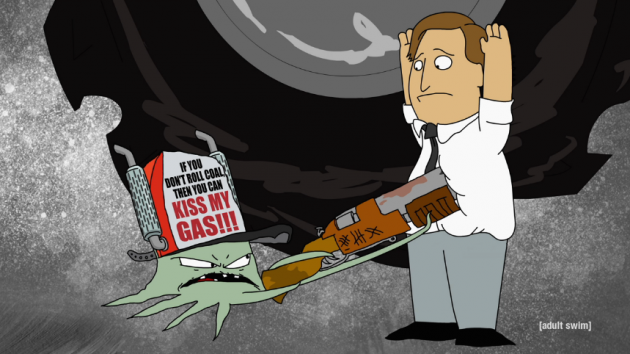 So… why do guns kill more people than cars now?

The crux of the problem seems to be that while road laws and federal safety regulations for cars continue to evolve in the United States, gun laws continue to not do that at all. Additionally, continued technological advancements allow for cars to be equipped with new and increasingly available safety features.

“By contrast,” The Economist reports, “safety features on firearms—such as smartguns unlocked by an owner’s thumbprint or a radio-frequency encryption—are opposed by the National Rifle Association, whose allies in Congress also block funding for the sort of public-health research that might show, in even clearer detail, the cost of America’s love affair with guns.”

Really, to say that smartguns are merely “opposed” by gun rights advocates is something of an understatement, considering that gun dealers have received death threats just for selling the safer, technologically-advanced firearms:

By contrast, auto dealers rarely get death threats for selling cars that have advanced safety features. While essentially every car customer would like a non-deadly product, most gun buyers are looking for quite the opposite.