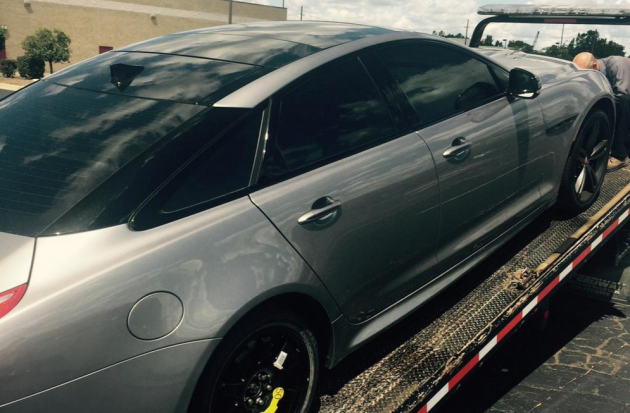 In anticipation of today’s 4:00 pm trade deadline, Major League Baseball teams have been dealing players left and right in a flurry of trades this week. One of the players who had to pack his bags was All-Star pitcher David Price, who the Detroit Tigers sent north to the Toronto Blue Jays.

In a moment of big league irony, though, Price’s attempt to abandon America’s Motor City for a new country was thwarted by his own foreign automobile, a Jaguar XLR, which blew a tire en route to Canada.

We’ll let him tell you the story:

Sweet tire blew out on my way to the six… waiting on #AAA with bubble guts is always fun!! To trust or not to trust ?!

Uncccllleeeeee…no one has tires to fit the back of my car so my presence in the 6 is gonna be delayed another couple hours…unreal! — David Price (@DAVIDprice14) July 31, 2015

His Jag, which he apparently named “Jenny,” was eventually picked up:

Jenny got a busted lip but she will be just fine! Things can always be worse…find a positive in negative situations pic.twitter.com/xsi5H0LgqZ

A definite nuisance on his road to a new team. But don’t feel too bad for Price—not only did he eventually make it to Toronto, but when he got there, the “trashbag full of popcorn” that he requested the night before on Twitter was waiting for him in the locker room:

Sorry to hear about the car troubles @DAVIDprice14! Your locker is ready for you when you arrive! #sharingiscaring pic.twitter.com/m8mWWY5wAq

It’s good to be a baseball player.