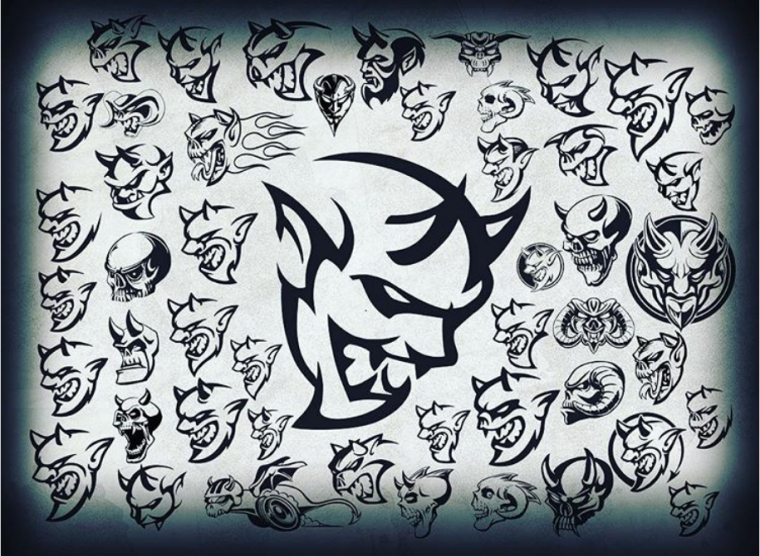 With its incredible capabilities and performance on the drag strip, the Dodge Challenger SRT Demon is easily one of the most iconic cars to come out of the past decade. One of the Demon’s most iconic features is the iconography that adorns the vehicle: a custom Dodge Demon badge.

The badge itself has several similarities to Dodge’s previous Hellcat badge design, such as the shape of the eyes and mouth. At the same time, the ferocious feline has been transformed into an impish devil from Hades itself.

The Demon wasn’t always set to bear the badge that it currently possesses, however. Recently, Mark Trostle, the head of design for both Dodge and SRT, shared concept art for the Demon logo over Instagram.

The image contains nearly 50 different possible iterations of the Dodge Demon’s logo. Featured prominently in the center is the design that ended up coming out on top.

Reportedly, the design team wanted an emblem that would look timeless for the drag-racing Demon. The Demon symbol needed to invoke hellish imagery without appearing too off-putting, instead sporting a somewhat “playful” look.

While the finished design does meet those criteria, there are still plenty of interesting concept designs to admire. Many of them bear a striking resemblance to the original Hellcat sigil, albeit with an even more unholy demeanor.

Others resemble a canine more than they do a feline. In fact, one design near the upper-right corner looks a lot like the demonic dog Zuul from the ’80s classic Ghostbusters:

There is no Demon, only Zuul
Photo: Columbia Pictures

On the other side of the image near the upper-left corner, sharp eyes might view a visage resembling the Balrog from The Lord of the Rings trilogy:

This design “Shall not pass!”
Photo: New Line Cinema

It seems that many of the designers were set on incorporating skulls into the design, as that motif shows up throughout several of the prospective sketches. Ultimately, Dodge settled on a more traditional look for the Demon’s final emblem.

While it would have been fascinating to see some of these concepts come to fruition, the Demon’s finalized symbol seems to fit right in with the rest of the imagery found throughout Dodge’s performance vehicle lineup.