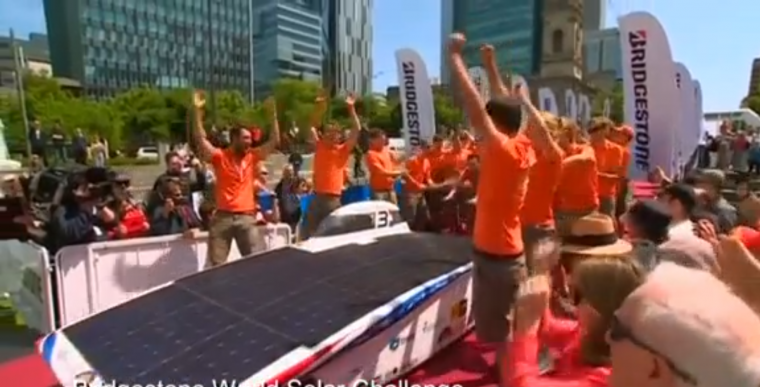 As temperatures start to fall here in the Northern Hemisphere, it’s easy to forget that south of the equator things are getting brighter and sunnier. This is especially true for Australia—and that is why October is the setting of the World Solar Challenge, a 1,800-mile race across the blazing Australian outback with only the sun for power.

Each car is only allowed to store 5 kW of energy (according to Forbes, a lightbulb uses 4 kW per week if it is left on for 10 hours a day). Other than that, the cars can only take power from sunlight or from motion of the car.

Sunlight was in ample supply for the race, with temperatures reaching 111 degrees Fahrenheit. This causes its own problems, though—solar arrays heat up in the light, so are sprayed with distilled water at control stops along the route (normal tap water leaves layers of salt or other solids on solar panels as it evaporates).

On top of that, there is the effect of the heat on the drivers. Since none of the teams were willing to use any of the precious solar energy on air conditioning, the drivers trained in heat rooms to prepare, with the best aid during the race being simple water—the winning team even installed a hole in the floor of the car itself to allow sweat to drain out.

Speaking of, the winning car was the Nuon, built by a Dutch team from Delft University. This is the team’s second consecutive win, as the Delft car won at the last race in 2013, and is the University’s sixth victory. You can watch the car cross the finish line in the following Reuters video.