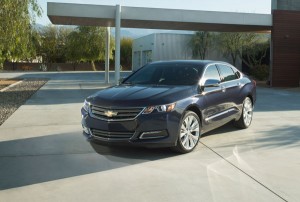 The Chevrolet Impala has been completely redesigned for the 2014 model year, and will offer a technology never before seen in Chevy vehicle.  The 2014 Chevy Impala adaptive cruise control, which can help to reduce the stresses involved with every day driving.

GM conducted a large field test of the technology in 2005 in collaboration with the University of Michigan Transportation Research Institute to test the effectiveness of adaptive cruise control.

“Results indicated that brake-apply rates were 25 times lower under freeway conditions relative to manual driving,” said James Sayers, a research scientist in the institute’s Human Factors Group, in a press release. “These results suggest that Adaptive Cruise Control can substantially reduce the workload and stress associated with the everyday task of car following.”

Adaptive cruise control in the 2014 Chevy Impala is the next step in vehicle innovation to come from the Detroit automaker, but would it be easy for you to trust your vehicle to brake for you?