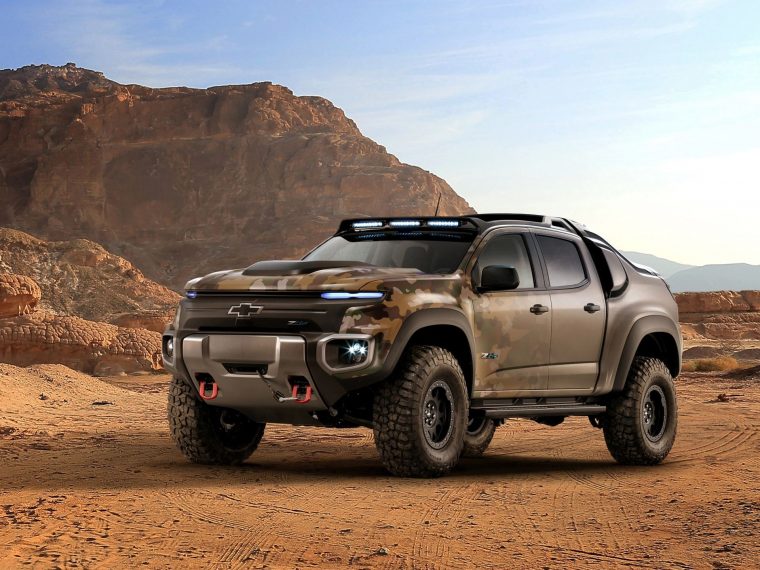 When most people think of off-road vehicles, they probably picture some brawny, gas-guzzling truck with monster wheels whipping through the mud or dashing over sand dunes with ease. However, GM has joined forces with the military to bring about a more eco-friendly off-road vehicle specially designed for the U.S. Army to use.

A-1 Advantages: Top 3 perks of having a truck

The current designs are for an off-road version of the Chevy Colorado called the Colorado ZH2. It’s a fuel cell electric truck that is surprisingly and stealthily quiet thanks to its alternative fuel source. Not only would the Colorado ZH2 help conserve natural resources, but its sheer quietness would give U.S. soldiers an advantage on the battlefront. Reporter Andrew Ganz from Green Car Reports commented on his test drive of one of the models: “What really impressed us was the ZH2’s nearly silent operation…Compared to the rattling diesel-fueled Humvees the army currently uses, the ZH2 is a breath of fresh, quiet air.” Fresh and quiet are two descriptors not usually associated with off-road trucks. (Good job, GM!)

Although this test model is technically new, it’s really just a fusion of Equinox’s hydrogen fuel-cell powered 177-hp electric motor and its proton-exchange membrane fuel-cell stack coupled with a more condensed version of the Colorado ZR2 off-road truck. This current alternative fuel technology is also not totally new to GM. The manufacturer has been cultivating its fuel-cell technology for decades, so the hydrogen fuel cell driven electric Colorado ZH2 isn’t a total surprise.

Exciting Escapades: Things to do with your Chevy Silverado near Amesbury

Whether the Colorado ZH2 is totally new or only partially-new, we’re excited about GM and the U.S. Army’s brainchild and its potential positive impact on military frontlines.