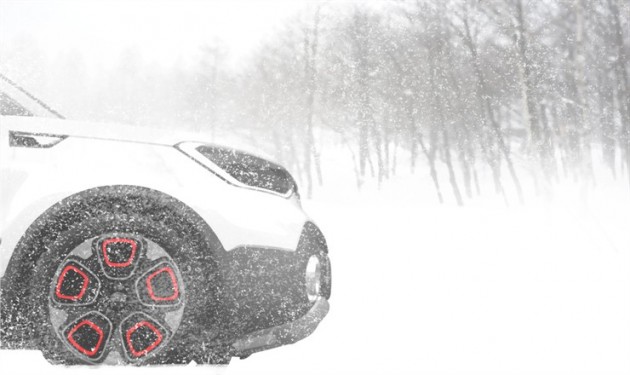 An electric all-wheel drive (e-AWD) Kia concept vehicle will be unveiled to the world at 9:00 am on February 12th at the 2015 Chicago Auto Show. That’s the good news.

The bad? Aside from what we can see in the recently released teaser photo (above), there aren’t a lot of things we actually know about this vehicle—including what its name is.

According to Kia’s one-paragraph (!) press release, “this bold off-roader was conceived by Kia’s California design studio and built for city dwellers seeking the ultimate urban escape. Intended to enable a wide array of outdoor activities from skiing and snowboarding, to camping, hiking and mountain biking, this rugged runabout captures the essence of adventuring at higher elevations with the promise of surefootedness in the wild.”

That gives us a good idea of the vehicle’s purpose, but doesn’t shed much light on the actual details. But on the other hand, that could be a good thing. Sometimes the less you know in advance, the more fun the reveal is.

We’ll have photos and (hopefully) more details when the Chicago Auto Show kicks off next month.