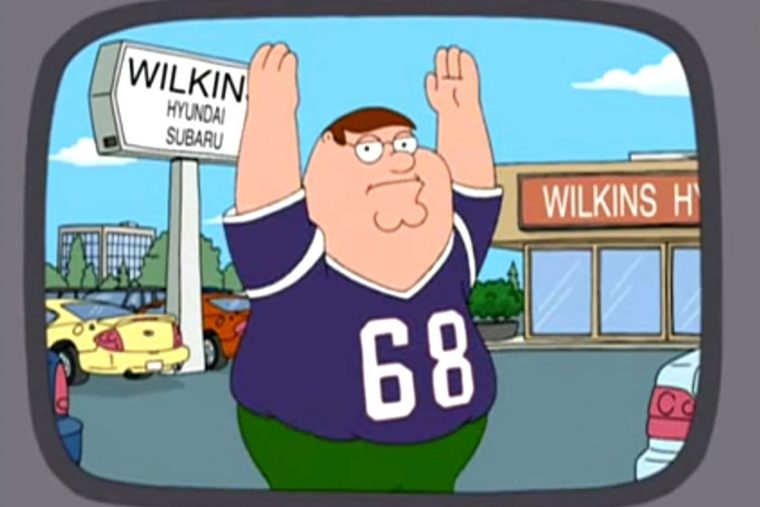 Is it possible to be any more excited about cars?
Photo: Fox Broadcasting

In the majority of fictional worlds on television, the characters drive cars, but rarely do we get glimpses into where the characters buy those cars. While vehicle shopping certainly isn’t rousing entertainment, it can sometimes make for good material to lampoon.

In the town of Quahog, Rhode Island of Seth MacFarlane’s Family Guy, a dealership called Wilkins Hyundai Subaru is the place to go for a car. Their slogan, also a fitting and catchy jingle, is “At Wilkins Hyundai and Subaru, we have Hyundais and Subarus.”

What a Pain! Are you one of these worst types of drivers?

In the episode “Patriot Games” (Season 4, Ep. 2), which originally aired on January 29, 2006, protagonist Peter Griffin gets involved in professional football when he meets up with Tom Brady. “Patriot Games” is most well-known for the rousing rendition of The Music Man‘s “Shipoopi,” but there’s another scene that causes many car-enthusiasts to chuckle. Peter’s brief stint on the New England Patriots involves an endorsement commercial in which he advertises for local car dealership Wilkins Hyundai Subaru.

In the commercial, dead-pan Peter announces, “Hi I’m Peter Griffin of the New England Patriots. I’m here to kick off the touchdown of Savings Weekend at Wilkins Hyundai and Subaru. We will blitz the competition and in no time you will be driving your new Hyundai or Subaru right to a touchdown…”

The skit is a light, tongue-in-cheek parody of real car dealership commercials that’s surprisingly well-mannered for the oft-obscene program.

Wilkins Hyundai Subaru actually shows up again in the later episode, “Hell Comes to Quahog” (Season 5, Ep.  3); Peter goes there and purchases a tank while shopping for a car for Meg. Multiple fake Facebook pages have been created by Family Guy fans advertising the dealership, and there actually is a Wilkins Hyundai in Illinois and a Wilkins Subaru in Maryland.

The Real Thing: Bet you don’t know these fun facts about the real Hyundai Elantra