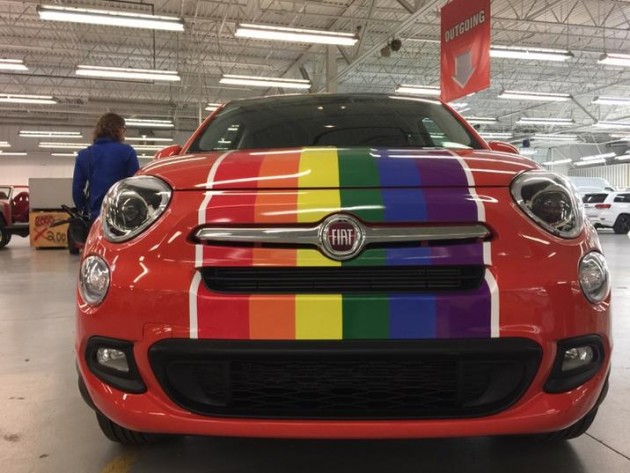 Over the weekend, Detroit was figuratively painted rainbow as members of the lesbian, gay, bisexual, and transgender (LGBT) community and its allies celebrated LGBT culture and recognized the fight for equality in marriage, the workplace, and more, during the annual Motor City Pride event. Motor City Pride was a two-day festival, including a parade, held on June 6th and 7th.

Fiat Chrysler Automobiles (FCA) served as a key sponsor of the festival and the lead sponsor of the parade. This doesn’t come as a surprise. FCA has always been at the forefront of automakers that embrace diversity and fight for equality for its LGBT workers and customers. Back in 2000, FCA (Chrysler Group at the time) began to provide benefits to domestic partners of employees, and year after year, it continues to achieve a 100% on the Human Rights Campaign’s Corporate Equality Index. More recently, FCA spoke out against Indiana Governor Mike Pence when he signed into law an act clearly aimed at discriminating against LGBT people. Due to pressure from pretty much everyone with a brain and too many large businesses to name, Pence reversed the act shortly after penning it into law.

At this year’s Motor City Pride, FCA showed off its new 2016 Fiat 500X, which is recognized as Fiat’s first all-wheel-drive model. As the grand marshal, the 500X led many of the 300 Michigan same-sex couples who married on March 22nd, 2014, in the parade. The parade started at Chrysler House at noon yesterday, and it ended at Hart Plaza in Detroit. 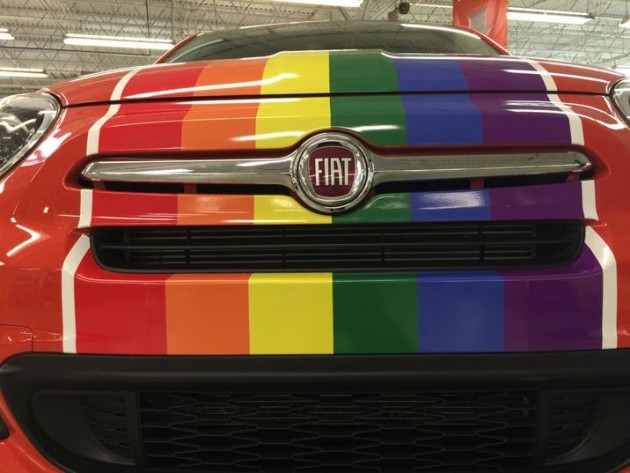 A Fiat 500X, decked out in rainbow, led the parade this year at Motor City Pride

“We are honored to have such a prominent role with this year’s Motor City Pride,” said Jason Stoicevich, Head of FIAT Brand North America. “Supporting the LGBT community and the diversity of all of our customers is paramount to the FIAT brand. I am proud of what FCA US and the brand have achieved in creating an inclusive work culture, a culture that helps generate vehicles that resonate with diverse buyers and communities.”

Fiat Chrysler isn’t just doing this for show either. The automaker has its own LGBT Employee Resource Group (and has five more, for other minority groups), called the Gay and Lesbian Alliance (GALA). The automaker is also a member of the Michigan Competitive Workforce Coalition, which is actively working toward eliminating legal discrimination of LGBT people in the workplace.