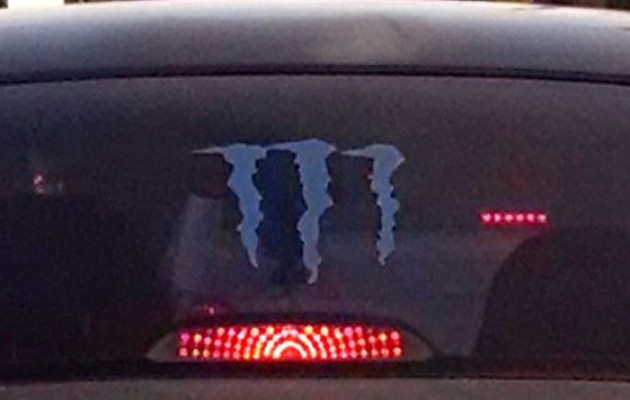 Yesterday, we reported that a man in Florida was “running around like a monkey with his tongue out” and jumping onto moving cars, convinced his life was in danger. Authorities attributed the man’s paranoia to the fact that he was high on meth, but now that we know he’s sharing the road with reptilian humanoid aliens, we think maybe some of his suspicions were justified.

An unnamed man in Florida believes that a photograph he took last February of the Kia Spectra driving in front of him contains evidence of extraterrestrial life.

He’s reported the photograph to MUFON (the Mutual UFO Network), as well as his story:

Rearview mirror i think has a reptilian staring back at my camera as i take a pic from my car behind it. I couldnt see the rearview mirror at the time and saw later when i zoomed in on the photo. I was taking a picture of the huge monster logo decal which i had heard in the news a woman claiming it was a symbol for 666. They were goofing on the woman in the story on the howard stern show. I thought it was weird to have a huge logo on your car and then later noticed another set of numbers in the license plate that made me think that maybe that lady wasnt so crazy.

Did you hear that, woman who thinks Monster energy drinks are satanic? A Florida man who saw a secret lizard person driving a Kia doesn’t think you’re so crazy, after all!!

If you don’t see an alien in the photo above, then you obviously need your eyes checked. But this lightened, heavily cropped edit might help you see the light: 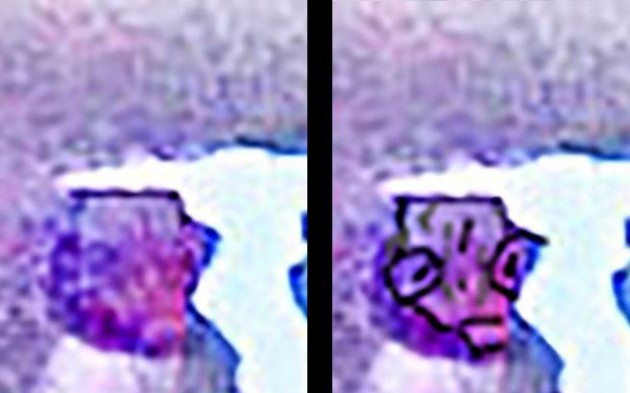 If you’re still confused, allow the photographer to walk you through it:

It’s harder to see on the phone, but my laptop shows that ambient glow behind the huge yellow(?) right eye that reminds me of my cats eyes in certain lighting. Also I believe i see a glassy highlight of white light reflection on the lower part of the same eyeball. It’s almost clearer to me when unedited because the lines aren’t pixelated and distorted by the high contrast and i can see the gradients where I would expect them to be on huge eyes. I see the vertical black slits for pupils. And the folds of skin in the right places for the thick heavy eyelids and weird scaly protrusions in the middle of the forehead. Finally, the eyes/pupils are where I would expect them to be since they are looking at my hand outside my window holding up my camera. And the alien looks like it’s frowning from the mouth turned downward and the forehead area looking twisted from stress.

So, to summarize, there is currently a reptilian alien driving around Florida in a Kia Spectra. He loves Monster energy drinks and/or Satan, and he’s kind of stressed out right now, so if you see him, please just give him some space.