Ford Brings Forza Focus RS, GT to Gamescom (With Help from the Stig) 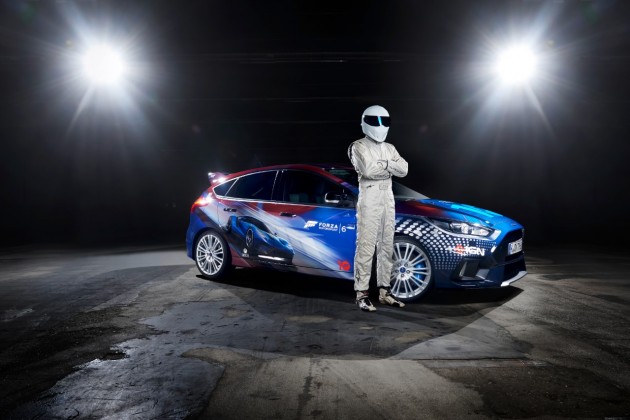 Ford is at Gamescom this week in Cologne, Germany, and because of its very visible presence in the world of video game racing, it made sure to make a good impression on the folks attending.

Not only did Ford bring the cover vehicle for Forza Motorsport 6, the all-new GT supercar, but it also showed up with a customized version of the all-new 2016 Ford Focus RS driven by none other than the Stig from Top Gear.

The Forza Focus RS is dressed up in a livery that as designed by the winner of a competition amongst Forza Horizon 2 players. The GT was presented in all of its unfettered glory.

“In Forza Motorsport 6, racing and gaming enthusiasts all over the world will be the first to experience Ford’s new ultra-high-performance supercar, the Ford GT,” said Dan Greenawalt, creative director at Turn 10 Studios in Redmond, Washington, U.S. “In Cologne we’re excited to showcase the real all-new Focus RS clad in a special paint scheme created by the Forza community. During Gamescom, gamers will also get to see the Forza Motorsport 6 cover-car Ford GT in person.”

The vehicles will be on-hand for the show as a means to help Forza 6 make a splash in its European debut. The game will go on sale later this year, exclusively for the Xbox One. Gamescom runs from August 5-9.