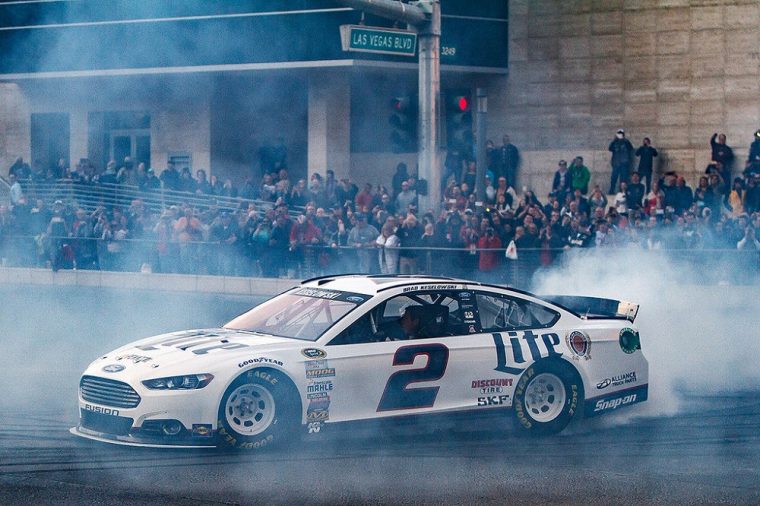 In 2015, former NASCAR Sprint Cup Series champion Brad Keselowski only managed to win one race. In 2016, he has already quadrupled his win total and there are still 18 races left remaining.

The 32-year-old Keselowski managed to use fuel strategy to pick up his latest victory in the No. 2 Ford Fusion racecar. While many other competitors were forced to hit pit road in order to fuel up in the last few laps, Keselowski stayed on the track to take the checkered flag. However, he unfortunately couldn’t perform his customary burnout after the race because his stock car ran out of gas after crossing the finish line.

Fellow driver Carl Edwards finished the race in second and was able to close a wide gap between himself and Keselowski’s car in the final laps, but he couldn’t get around Keselowski’s Ford to pick up the victory. Team Chevy drivers Ryan Newman, Kurt Busch, and Tony Stewart finished in third, fourth, and fifth, respectively.

“We ran out with about two (laps) to go,” Keselowski told the Associated Press. “Somehow we limped it around and stay ahead of Carl (Edwards) and bring it home. This is something I’m not going to forget.”

Another noteworthy thing that took place in Sunday’s race was six-time NASCAR champion Jimmie Johnson’s crash on lap 33, which resulted in the race in 32nd position.

The Sprint Cup Series will be in action again on July 17th when the drivers will be making left turns at New Hampshire Motor Speedway. The event will be broadcast by NBCSC and is scheduled to begin at 1:30pm.

Traveling This Summer? Check out these must-see beaches in Long Island

Video: Watch the Final Laps of the Kentucky Race