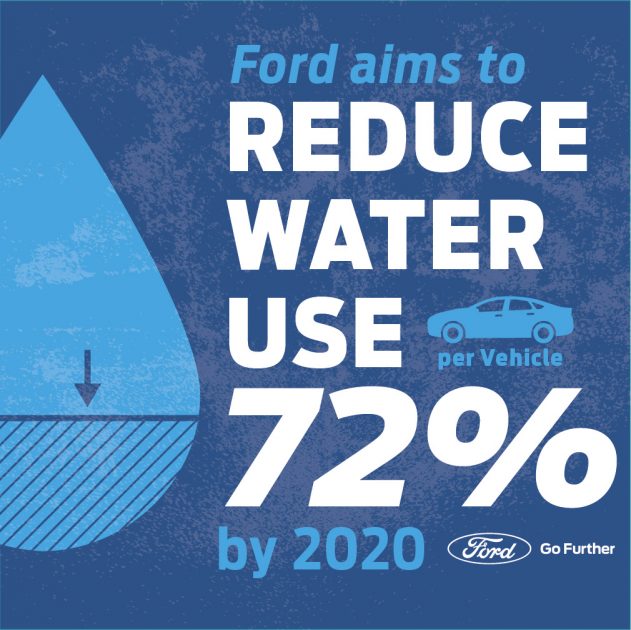 Ford Motor Company in October once again received an “A” grade for water conservation from CDP, marking the third consecutive year that Ford has earned the not-for-profit’s top honor. Having already cut water usage by 61% from 2000-2015 through its Global Water Management initiative, Ford has the stated goal of cutting water usage by an additional 30% per vehicle between 2015-2020 and the ultimate goal of using zero potable water in its manufacturing process.

“Water is a precious resource,” says Andy Hobbs, Ford director, Environmental Quality Office. “We recognize that every person has the right to accessible, clean and affordable drinking water, and we aspire to ultimately have zero drinking water withdrawal for our manufacturing processes, and are proud that CDP is recognizing our efforts to remain a global water conservation leader.”

“We congratulate Ford Motor Company for achieving a position on CDP’s water ‘A’ list,” said Paul Dickinson, Executive Chair, CDP. “Climate change, industrialization, and population growth are putting unprecedented pressure on water supplies, and Ford is stepping up for a water secure world, moving us towards a tipping point on environmental action.”

Earlier this year, Ford became the first automaker to join the “Improve Water Security” initiative set forth by the Business Alliance for Water and Climate, which is supported by the United Nations Framework Convention on Climate Change. Ford outlined its water conservation efforts as being one of its key missions in its 2017 Sustainability Report, including its endorsement of the UN Global Compact CEO Water Mandate.