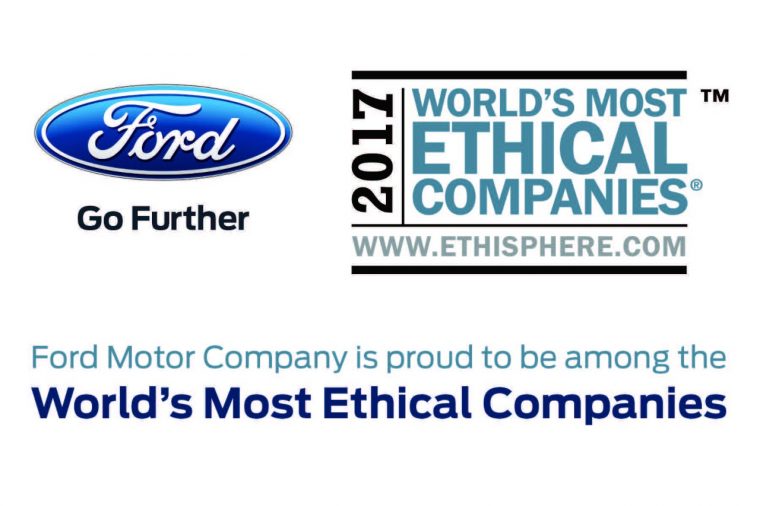 Ford maintains its record streak by appearing on the Ethisphere Institute’s World’s Most Ethical Companies list for an eighth straight year—an unprecedented number for any automaker.

Ford’s inclusion on the 2017 World’s Most Ethical Companies list also makes it one of only two automakers to receive recognition this year—Volvo being the other. In each of the previous seven years where Ford was named among the WMEC, it was the sole automaker represented.

In total, Ethisphere named 124 honorees among its World’s Most Ethical Companies for 2017. These companies represent 52 different industries spread across 19 countries over five continents. Other notable companies named to this year’s list include Delphi, Cummins, GE, Hasbro, Microsoft, PepsiCo, Starbucks, and Target.

All honorees are determined using Ethisphere’s Ethics Quotient, which is based on factors including: ethics and compliance program (35%); corporate citizenship and responsibility (20%); culture of ethics (20%); governance (15%); and leadership, innovation, and reputation (10%).

Ford continues to score well due in part to its commitment to sustainable energy practices and dedication to upholding human rights and safe working conditions both in-house and along its supply chain. In addition to this honor, Ford last year was named one of America’s Best Corporate Citizens by Forbes and earned both a 100% in the Human Rights Campaign’s Corporate Equality Index and an “A” from the CDP for water conservation.

“Strong ethics and corporate citizenship are the foundation of our business philosophy, which demonstrates to our customers what we stand for as a company,” said Bill Ford, Ford Motor Company Executive Chairman. “This honor is a reflection of Ford’s core values, and it shows that our employees are continuing to make the right decisions every day for all of our stakeholders.”

And the Cars Aren’t Bad, Either: Three reasons to make your next new ride a Ford