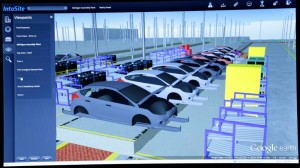 Ford is teaming with engineering/electronics conglomerate, Siemens, to use their new virtual pilot software in the effort of improving global interactions and intelligence-sharing.  The software, known as the IntoSite app, will allow for virtual navigation of assembly plants down to the most minute detail, ensuring streamlined and efficient production across the world.

“Under the Ford production system, we are constantly looking for ways to improve standardization around the globe,” said John Fleming, Ford executive vice president of global manufacturing, in the automaker’s press release.  “The Siemens IntoSite software pilot is helping us explore the realm of possibility for future cross-regional workplace communication.”

The IntoSite app is part of the Technomatix portfolio and is a cloud-based web app built with the same infrastructure used to create Google Earth.

Through the IntoSite software, Ford engineers or team members will be able to add pins at locations within the assembly plants and upload their own content specific to these locales—including videos, images, and documents.  This makes for easier sharing across Ford’s global network of professionals, making communication and cooperation trouble-free. 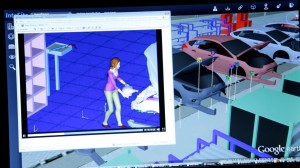 According to Ford’s press release, the benefits of using Siemens’ pilot software will be most notable in three areas: efficiency, globalization, and standardization.  Streamlining large media file sharing processes, making virtual plant visits a reality, and using file-sharing to create a globally-uniform manufacturing process for quality assurance are just a few of the benefits of Fords’ use of IntoSite.

“Ford takes a very innovative approach to manufacturing, so it’s no coincidence that they are the first to leverage IntoSite,” said, Zvi Feuer, senior vice president, manufacturing engineering software, Siemens PLM software.  “Siemens and Ford have been working together for many years to close the knowledge gap between engineering and manufacturing.”