Of the many fascinating stories from the motorsports world, few are as legendary as Ford’s feud with Ferrari in the 1960s, a rivalry that brought Carroll Shelby to fame and revolutionized the American automotive industry following the unforgettable 1966 24 Hours of Le Mans.

The first Ford v. Ferrari trailer dropped on Sunday, June 2 and we’re thrilled with what we’re seeing already. We’ve been waiting a long time for the story to get the respect it deserves, and the nostalgic production design, high-intensity cinematography, and beautiful vehicle replicas don’t look they will disappoint.

Ford v. Ferrari trailer promises excitement on and off the track 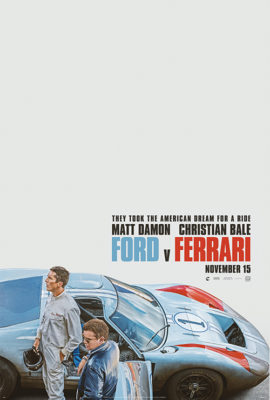 The Ford v. Ferrari trailer reveals that the film takes the side of Shelby and Ford, painting the rivalry as a scrappy underdog story rather than a clash between industry giants (spurred by indignation after Henry Ford II failed to buy Ferrari and vowed to beat Ferrari at the 24 Hours of Le Mans in retribution).

The film has been in production since at least 2013, when it was titled Go Like Hell and set to star Brad Pitt and Tom Cruise. That script was a direct adaptation of the white-knuckle drama Go Like Hell: Ford, Ferrari and Their Battle for Speed and Glory at Le Mans, written by A. J. Baime.

Last year, the script was retooled and a new cast and crew were brought on. This version is directed and co-written by James Mangold, whose last biopic was 2005’s Walk the Line about Johnny Cash. In recent years, his work on the acclaimed Logan earned him an Academy Award nomination.

Though a 20th Century Fox production, Disney will be releasing the film following the studio’s recent acquisition of Fox. Originally slated to arrive in theaters this month, release of Ford v. Ferrari was postponed to Nov. 15, probably aiming for Oscar gold instead of summer blockbuster bucks.

If you loved the Ford v. Ferrari trailer and can’t wait until November to find out what happens, read Go Like Hell by A. J. Baime or check out the 2016 documentary The 24 Hour War. Both do a fantastic job chronicling the drama from every side.