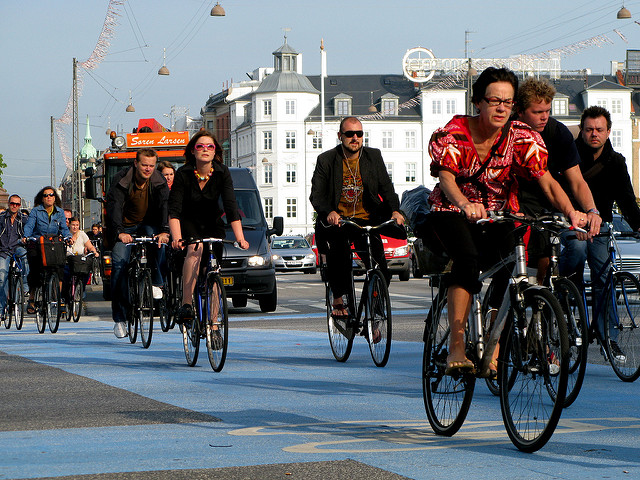 Cycling is a popular mode of transport for commuters in Copenhagen.
Photo: Mikael Colville-Andersen

According to a Greenpeace study, Copenhagen, Amsterdam, and Oslo hold the top three spots for Europe’s cleanest and safest transport systems. Germany’s Wuppertal Institute performed the study on behalf of Greenpeace. The study analyzed 13 European capitals on a variety of factors, such as car-sharing services availability, affordability of public transportation, and air quality.

As Greenpeace Clean Air Campaigner Barbara Stoll articulated, “Safe roads and clean air go hand-in-hand. This study shows that when you improve a city’s public transport infrastructure in a sustainable way, people breathe cleaner air and their roads are safer.”

By contrast, Rome ranked the lowest on the list for cleanest and safest transport system. (Paris, Moscow, and Budapest rated lower than Rome did in the air quality category.) Considering Rome’s reliance on privately-owned vehicles—65% of all travel is conducted via personal auto—it’s no wonder that it got such a low rating on the Greenpeace study. Sub-par public transportation and cheap parking are both two major factors that contribute to residents opting to drive their own vehicle rather than take a more eco-friendly form of transportation which would help lower the city’s overall emissions.

Used Advantages: Benefits of going with an older vehicle

Because so many people use cars on Roman streets, this also feeds the poor safety rating it secured on the Greenpeace study. The congested streets and concentration of air pollution increased the danger for cyclists and pedestrians navigating through the city. According to the report, there were 133 crashes reported for every 10,000 pedestrian trips, and 110 crashes reported for every 10,000 bicycle trips.

As the wording of the study articulated, “Reducing the share of internal combustion engines should be a priority.” More cities should follow the lead of Oslo, Amsterdam, and Copenhagen, and revamp their public transportation and urban layout so it prioritizes non-car travel. Closing the city center to vehicles, enhancing rideshare services, and investing in public transportation are three practical steps other urban areas should consider to increase pedestrian safety and minimize air pollution.