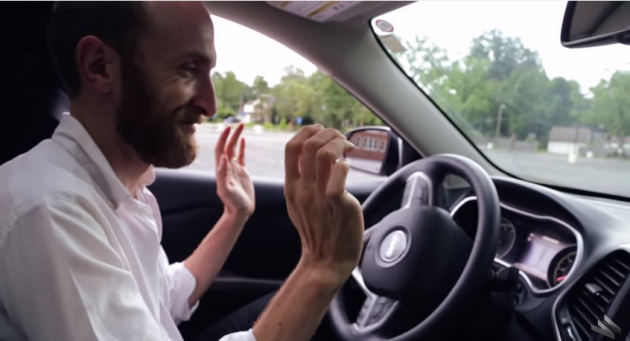 Charlie Miller and Chris Valasek take control of a Jeep Cherokee from 10 miles away, steering the SUV with ease
Photo: YouTube

Imagine you’re just driving along minding your own business, when suddenly it seems like your car has grown a mind of its own. Your air conditioning starts blasting cold air at the highest setting, your windshield wipers begin to wipe, and your music begins blaring—all without you touching a single control.

Related: The future of autonomous cars

This is exactly what happened to Andy Greenberg, a senior writer for WIRED magazine, while he was driving his Jeep Cherokee. Greenberg had signed up to be a “digital crash-test dummy” for Charlie Miller and Chris Valasek, two of the industry’s most well-known researchers in the car-hacking field.

And a test dummy he was.

From 10 miles away, Miller and Valaseck managed to hack into Greenberg’s vehicle, even transmitting a video of the two of them doing so to Greenberg’s touchscreen.

Watch the Jeep Cherokee get hacked:

Miller and Valasek have discovered a method of hacking into Jeep Cherokees that is sure to rock the industry. With a few clicks of the mouse and a couple taps of the keyboard, the two men can gain control of everything in the Jeep, from its dashboard functions and entertainment system to its brakes and transmission.

Luckily, they are choosing to do good with their knowledge, rather than evil—the research will be used in a presentation at the Black Hat security conference in Las Vegas next month.

Because of this research, many carmakers are spooked. There has been a movement toward implementing more secure on-board automotive programs—and Jeep is the first to make a move, offering more security than ever before with an updated system.Senators Ed Markey and Richard Blumenthal are even planning on introducing an automotive security bill to set new digital security standards for cars and trucks.

Hopefully, this means even safer vehicles in the future.