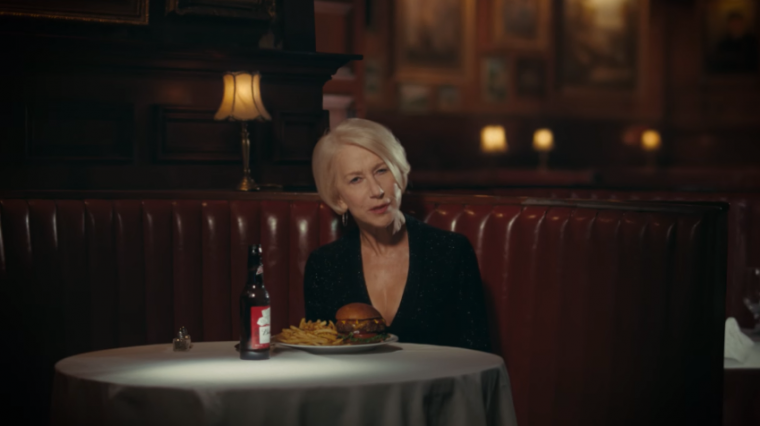 More Super Bowl 50 commercials are hitting YouTube, getting viewers excited for the big game. Beer giant Budweiser is a staple advertiser during the annual event, and this year one of its spots uses the large personality of Dame Helen Mirren to drive home the point of how stupid drunk driving is.

When the commercial opens, Mirren is seated at a table in a restaurant, being served a hamburger, fries, and a bottle of Budweiser. She introduces herself as a “notoriously frank and uncensored British lady.” Once that is out of the way, she becomes incredulous that anyone in this day and age would still choose to get behind the wheel drunk. She drives the point home by piling on insults. One of the best lines is when she says “If your brain was donated to science, science would return it,” and when she calls drivers under the influence “pillocks.”

To remind viewers that she has played The Queen of England several times on film, stage, and  television (most famously as Elizabeth II in The Queen and as Elizabeth I in a special miniseries for HBO), she uses the royal “we” when addressing the audience. She reminds viewers that by being responsible, they are saving families heartbreak and keeping drivers safe.

According to the end card of the commercial, for every use of the #GiveADamn hashtag, Budweiser will donate $1 to programs that provide safe rides home after a night of fun, up to $1 million. In all seriousness, please call for a ride home if you have been drinking and have no designated driver. We at The News Wheel would miss you very much.