Here’s Your (Official) Look at the 2016 Chevy Camaro Convertible 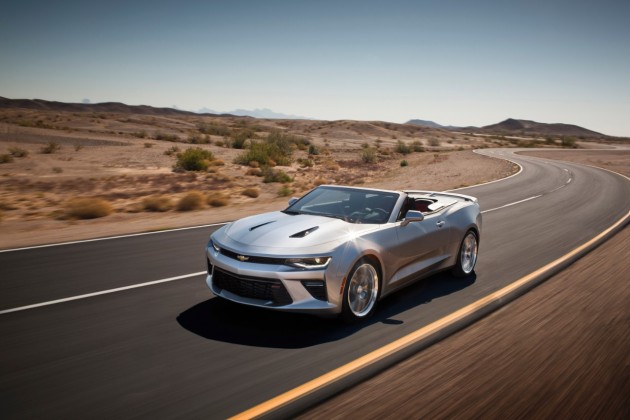 The 2016 Chevy Camaro convertible won’t arrive until early 2016, but Chevrolet just revealed the first official images of the upcoming model.

Sure, technically you already saw the droptop yesterday, when General Motors accidentally posted the pics early, before realizing the mistake and quickly taking them down. But those were blurry, out-of-focus screenshots–the automotive equivalent of the grainy Patterson-Gimlin Bigfoot film.

These, by contrast, are big, high-quality images–the automotive equivalent of a 1080p Blu-Ray disc of Harry and the Hendersons.

Take a look at the gallery:

According to Chevy, lowering and raising the top is a fully automatic process with latches that automatically release and secure the top. It can be opened or closed while in motion (at speeds up to 30 mph), or opened remotely with the key fob. When lowered, a hard tonneau cover deploys automatically.

There are also acoustic and thermal barriers built into the electro-hydraulic power roof system, to keep drivers comfortable in non-convertible weather.

“The 2016 Camaro coupe will set the benchmark for the segment in terms of technology, performance and design,” said Camaro marketing manager Todd Christensen. “Adding the most sophisticated top in the segment brings another level of refinement–and driving enjoyment–to the Camaro convertible.”

Like the coupe model, the new Camaro convertible is 200 pounds lighter than the model it replaces.

“From the beginning, the Camaro’s architecture was developed to incorporate a convertible with uncompromised driving dynamics,” said Camaro chief engineer Al Oppenheiser. “Customers will appreciate what they don’t feel: quivers, cowl shake or an under-damped chassis typically found in a four-seat convertible.”

That architecture also ensures that the Camaro looks pretty good when going topless.

“With many convertibles, you have to affix a tonneau cover manually–if it’s done at all,” said design director Tom Peters. “The Camaro convertible’s automatically deploying hard tonneau not only makes it easier to enjoy convertible driving when the inspiration hits, it ensures the car always looks its best.”