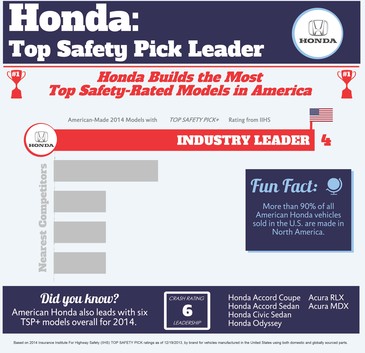 Honda boasts most top safety-rated vehicles built in the U.S.

In addition, two Honda vehicles were named Top Safety Picks for the 2014 model year: the Honda Civic Coupe and the Acura TL.

“Honda and its passionate engineers are delivering crash safety test performance at industry-leading levels as a result of our strong and continuous focus on innovation in safety technology and vehicle design,” said Art St. Cyr, vice president of product planning and logistics at American Honda Motor Co., Inc. “When you add safety leadership to our world-class durability, inventive packaging and top-class fuel efficiency, you’ve got the makings for a really smart choice for American car buyers.”

Honda hasn’t just been successful in the realm of safety, however. According to the EPA’s most recent report on fuel economy trends, Honda is the full-line automaker with the best overall fuel efficiency. Oh, and did we mention that Honda has more vehicles still on the road after 25 years than any other automaker? Yeah, you can go ahead and pick your jaw up from the floor now.

Congrats on all your achievements, Honda!