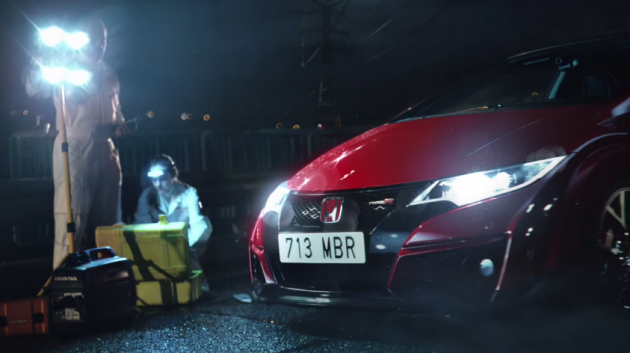 We’ve said it once, and we’ll say it again: if Honda ever decides it wants out of the automotive industry rat race, the company should consider trying its hand at filmmaking. From last year’s UNI-CUB OK Go music video, to the recent M.C. Escher-esque CR-V promo, this company knows how to make compelling (and frequently mind-bending) videos.

In the Japanese automaker’s latest commercial for the Honda Civic range, entitled “Feeling,” ad agency Wieden + Kennedy London focuses on the meticulous engineering that helps create moments of pure exhilaration on the road—like that moment when you upshift your Type R for a burst of acceleration.

“One of the most important things for Honda engineers when designing a new car is that it feels great to drive,” W+K’s Max Batten told Adweek. “We thought this would be a good story to tell for the Civic.” Thematically, he adds, “this campaign is about linking the Civic to those split-second moments where driving can be so satisfying.”

Like most of Honda’s technically dazzling commercials, this super slow-mo ad was an ambitious undertaking. The digital effects were done by the Motion Picture Company (MPC), the same computer graphics wizards behind Batman V Superman: Dawn of Justice, SPECTRE, and Furious 7.

“[Production] involved a huge amount of planning,” Batten says. “All the action was shot in layers, which were combined at MPC. The frozen elements were created using a combination of slow-motion filming and CGI. The shots had to be incredibly precise, and [director Johnny Hardstaff] did a fantastic job bringing it all together.”

Gird Your Loins: Take a look at these photos of the 2016 Toyota Prius

The commercial is certainly effective—maybe too effective. It’s a little bittersweet when you realize that this ad is the closest most Americans will come to actually “feeling” the performance capabilities of a Civic Type R, for at least another two years.

All in due time, though…