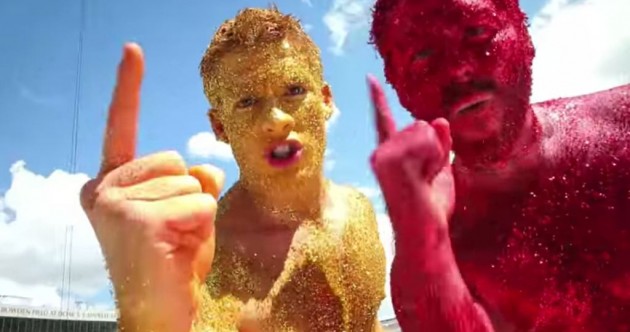 These two devoted fans proudly assert that the first Iron Man film was the best.
Photo: Hyundai via YoutTube

Time to smear your face with heavy coats of paint and drink until you forget how to correctly wear pants– or at least avoid people who do this. College football season is back!

In honor of its fourth year as NCAA college football sponsor, Hyundai Motors has launched a multi-faceted advertising campaign across college campuses and living rooms nationwide.

Suffice it to say, you won’t be able to ignore the crazed fans as Hyundai promotes NCAA football through national and regional video and social media advertising. The automaker is putting so much effort into the campaign, one might mistakenly think college football is a big deal.

Hyundai Promotes NCAA Football Until It Consumes You

If you live near, or in a 500 mile radius of, any of the 17 college institutions Hyundai helps promote through IMG College, you probably already know college football is its own religion.

In its newest national spot, Hyundai promotes NCAA football by focusing on “Hands” (which you can watch below). Not hands that actually pass or catch the football, nor ones that referee the game. Rather, it’s the hands of the hysterical fans that throw up gang signs– sorry, innocent hand signals for team loyalty.

If you want to get in on this action, use #ThisIsLoyalty to share pictures and posts expressing fervent loyalty. Or, check out the program’s site to purchase a hard-core window cling.

“Participating in college football and interacting with the incredibly dedicated fans continues to be a great way for us to share our pursuit of outstanding customer loyalty,” said Steve Shannon, vice president, Marketing, Hyundai Motor America. “This year we are putting a big spotlight on the food at these games.” 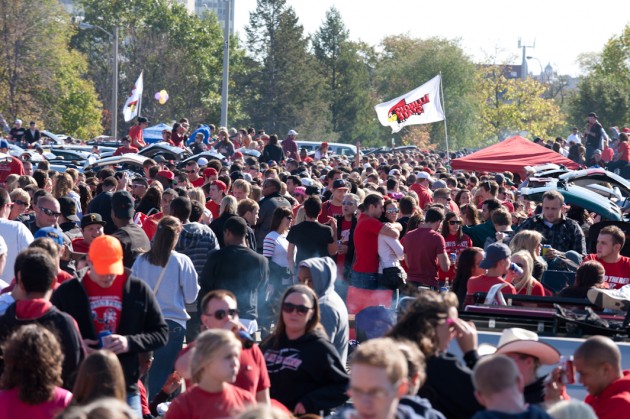 Don’t freak out, but this is just the waiting line to get into the tailgate party.
Photo: Illinois State Homecoming

In the coming months, Hyundai will also be delivering a 13-episode series helmed by YouTube presence Tastemade. For those of you more interested in the food than the fans, here’s your dish. While touring the top tailgating schools in the country, Tastemade will have local chefs redesign tailgate dishes at the Tastemade Kitchen in The Hyundai Fieldhouse.

Like the rest of the ad campaign, Hyundai promotes NCAA football by appealing to the regional “tastes” of local foodies.

If this still isn’t enough for you, don’t fret. You’ll have a whole day of Hyundai sponsorship on December 27th, when the brand will dominate the Sun Bowl in El Paso, Texas.

Whether you like them or not, college fans are going to be everywhere this year, in full force. It might not be your thing, but it might be wise to follow that old adage.

Related: Getting to know the 2014 Hyundai Accent