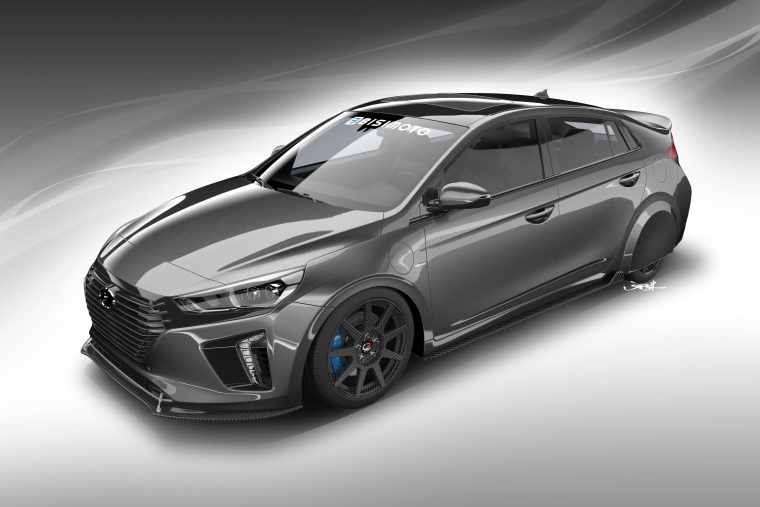 The 2017 Specialty Equipment Market Association (SEMA) Show is just around the corner. With opening day scheduled for less than two weeks from now, automakers and after-market engineering experts will be gathering in Las Vegas to present a range of specially-modified vehicles that show what a little elbow grease—and a lot of creativity—can do on a production car.

Hyundai has repeatedly been a major participant in the annual SEMA pageantry, showcasing a collection of one-of-a-kind custom models from its lineup. As this has been the first production year for the Ioniq, it’s fitting that the newcomer make an appearance at SEMA. With the help of its regular collaborator Bismoto Engineering, Hyundai Motors will be bringing a special version of the Ioniq to SEMA, dubbing it the “HyperEconiq Ioniq” concept.

This Year from Hyundai: Information on what’s new for the automaker’s 2018 lineup

In spite of all this, the HyperEconiq Ioniq’s most impressive aspect is its fuel efficiency. Multiple tests have pegged this vehicle’s average combined fuel economy well over 80 mpg—a stunning number considering its many performance enhancements.

“The HyperEconiq Ioniq takes the Ioniq where we always knew it could go, without sacrificing drivability,” said Bisi Ezerioha, president of Bisimoto Engineering. “Leveraging the outstanding Ioniq electrified platform and powertrain, we’ve focused on a variety of technical elements to bring efficiency, aero and design to the highest level.”

Keep your eye on the SEMA Show, running Oct. 31 — Nov. 3, for other thrilling offerings from Hyundai.

Don’t Miss This Newcomer: Hyundai is introducing the brand-new Kona next year