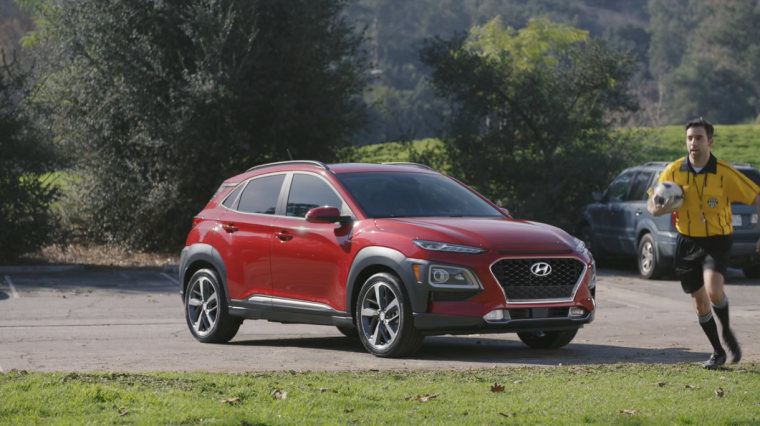 Just in case you might have missed it, there’s a big sports game this weekend. Heck, it’s possible that you nearly forgot all about that party you’re invited to on Sunday. You’re just so busy these days, and it’s really hard to keep track, ya know. Everyone there will no doubt be talking about sportsy things, like the dimple-chinned, movie-villain quarterback with the quack doctor sidekick, or the hard-luck team that hasn’t won a championship in well over 50 years, or whether or not people should stand or kneel for a song. But not you. No, you’re only gonna be there for two things: buffalo chicken dip and commercials.

A lot of those commercials are going to be from automakers who willingly ponied up ungodly amounts of money for precious airtime. Hyundai, one of those automakers, and also the official vehicle of the NFL, is planning to have a considerable presence with multiple different ads. So, when you’re looking up from your plate of chicken wings or from the solace of your football-free smartphone screen, there’s a fairly good chance that you’ll see a Hyundai.

More from Hyundai and the NFL: “Safeties First” campaign emphasizes the importance of having a plan

In our first spot, a tardy referee pulls up in an all-new Hyundai Kona to his gig at a football game. But, gasp, this is the other kind of football. And, clearly, these red-blooded American parents are not happy about the confusion between football and actual, hard-hitting, brain-destroying football, because they are all too happy to go along with the flow when the ref begins handing out red cards for everything from being too cute to being a twin. Because, you see, these parents are also eager to get home to watch football. American football.

Following up last year’s unique idea to film a commercial during the Super Bowl and air it during the post-game, Hyundai is also promising something that is said to surprise millions. Hyundai won’t say what’s so surprising, but it is showing us some people acting surprised and pleased, so presumably there’s some veracity to the idea of it being surprising. It also revealed that this commercial will air in the fourth quarter, so you at least won’t be surprised by when it winds up airing. But you might be surprised by, you know, the surprise aspect of it.

This is just a taste of what you can expect this Sunday during the vaunted super football. Or, if you’d rather just hang out at your house with your dog and binge-watch It’s Always Sunny in Philadelphia on Hulu instead, you could probably just check YouTube the following day and see what you missed. Up to you, really. Live your own life.