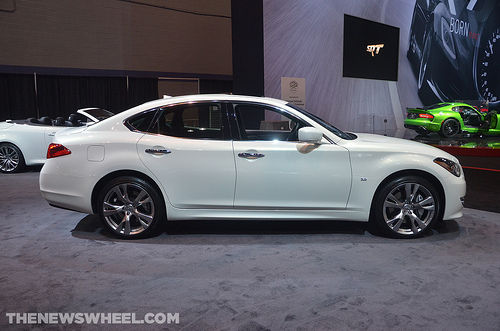 Below are the MSRPs for each model:

Updates and enhancements to the 2014 Q70 include revised spring/damper rates for the rear-wheel drive Sport Package models, and the addition of an engine oil cooler with the 3.7 Sport Package. Fuel economy on the Q70 Hybrid has been improved by two miles per gallon, to an impressive 31 mpg combined – not bad for a luxury sports sedan.

The Infiniti Q70 sets a precedence of luxury experience, impressive performance, and superior craftsmanship and technology. Formerly known as the beloved M Class, the 2014 Q70 boasts the same features that made the M37/M56/M35h enormously popular with consumers. Infiniti 2014 Q70 pricing remains on par with that of the luxury sedan formerly known as M, meaning that the legacy of the M Class as one of luxury vehicle shoppers’ first choices is likely to continue—regardless of what they’re calling them these days.

Brought to you by Glenn Infiniti in Lexington, Kentucky.