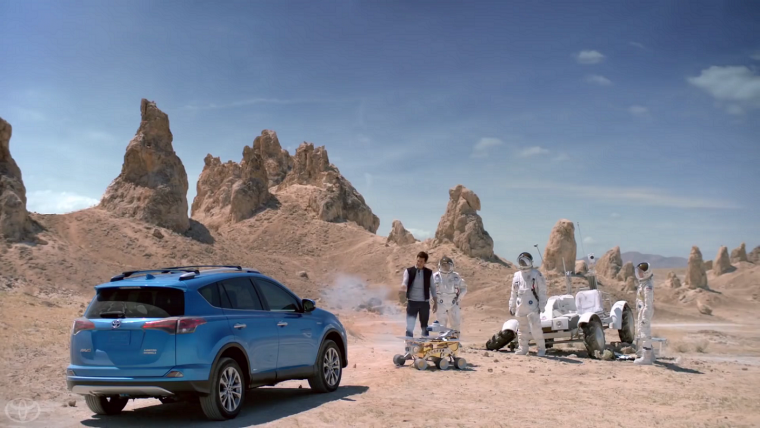 He’s probably telling them all about the Toyota’s features that the rover is lacking. What a snob.

James Marsden yet again took his 2016 Toyota RAV4 Hybrid to strange places as part of Toyota’s “Let’s Go Places” ad campaign. Since the launch of the series, he’s taken on lumberjacks, joined a wolf pack, and now has somehow found his way to a Mars Simulation Facility.

One wonders how he obtained the necessary credentials to get into the NASA base, but perhaps the fact that Marsden was the actor for Cyclops in the old X-Men trilogy was enough for the science geeks—that, or we’re putting far more thought into the commercial than we should.

The ad maintains the same type of campy humor that dominated the two previous ones, with Marsden hailed as a hero for rescuing the Mars team and even invited to join them for the remainder of their 697-day mission, though only after he uses the RAV4 Hybrid to carry their busted land rover back to the campsite, shares his sandwiches, and observes their methods.

Predictably, he declines the offer and leaves to “discover new frontiers and potable water” (both of which we’re sure he’ll find on the set for the next Toyota ad) while listening to SiriusXM satellite radio.

The astronauts were asking the wrong guy, really—Cyclops is famed for the laser beams that shoot out of his eyes, not for his survival skills in a Martian environment. Maybe they should wait till Matt Damon strikes a commercial deal with Toyota?