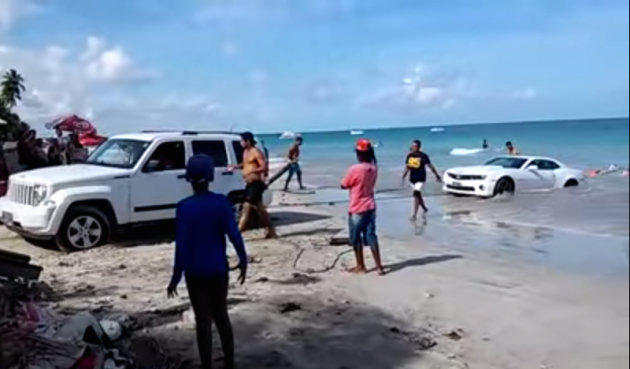 “The sea was angry that day, my friends… like an old man trying to send back soup at a deli…”

If ever a video needed context, this is it.

The following clip was posted to YouTube with the all-caps title “VEÍCULO CAMARO É RETIRADO DO MAR…VEJA!” (in lowercase English: “Camaro vehicle is removed from the sea… see!”), and shows a Jeep Liberty trying in vain to extract a beached Camaro from the ocean. Not explained: how the Camaro got there in the first place.

We don’t know why the Camaro was on the beach, but the prevailing theory on Jalopnik is that it was probably there for a photo shoot and then… didn’t notice the tide coming in?

So to summarize: it is unknown how the Chevy Camaro got in this position, or if they ever succeeded in getting it out. We only know that it’s pretty damn funny.