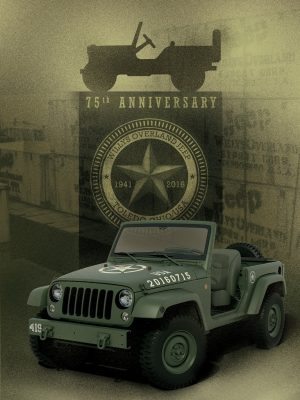 Jeep has been releasing limited edition models for its 75th anniversary left and right, but this one might be the best yet. To celebrate its origin as a military vehicle during World War II, the Jeep brand has created a Jeep Wrangler 75th Salute concept car, which Jeep lovers everywhere are sure to fall in love with.

Celebrate 75 Years: Find out how else Jeep is celebrating its 75th anniversary

“We are creating this unique Jeep Wrangler 75th Salute concept vehicle in celebration of the brand’s legendary history, and to demonstrate that 75 years later, today’s iconic Jeep Wrangler is instantly recognizable and clearly connected to the original Willys MB,” said Mike Manley, Head of Jeep Brand for FCA Global. “Since they were first produced in 1941, Jeep vehicles have been the authentic benchmark for off-road capability, having mastered more terrain, led more adventures, and provided drivers more freedom than any other vehicle before or since.”

There’s no doubt that the 75th Salute concept celebrates Jeep’s history—it looks like something straight out of World War II. This Wrangler uses the body of a two-door Wrangler Sport to highlight the model’s rugged functionality. Jeep has removed the vehicle’s B-pillars and doors and painted the exterior in an olive-drab color scheme. This color was well-known 75 years ago, when it was used on military vehicles.

Share Your Story: Tell Jeep about how you fell in love with your Jeep vehicle

Jeep has taken 16-inch steel wheels and wrapped them in 32-inch military tires. This concept vehicle is also done up with hood latches, steel front and rear bumpers with tow hooks, and low-back canvas seats. Each of these features recalls the original military Jeep vehicles. It even has bronze commemorative fender badges, and custom wood blocks and side mirrors.

So, if you want to take a step back in time and celebrate your love of Jeep, you might want to try to get your hands on this beautiful commemorative model.