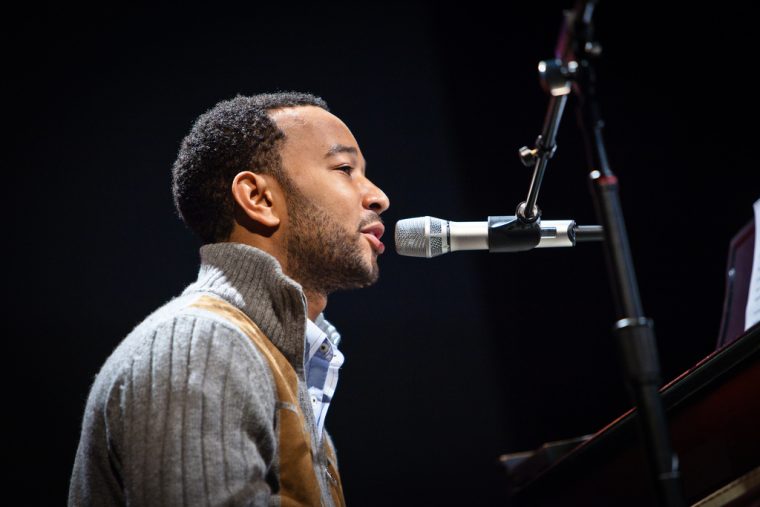 Oscar and Grammy winner John Legend spoke about his inspirations at the event sponsored by Kia
Photo: Kris Krüg

The New York Times has been hosting live video interviews called TimesTalks for a few years now, where the talented elite of Hollywood have intellectual and stirring conversations with New York Times journalists. They typically discuss their craft and distinct processes for getting into character or how they feel about certain roles. Notable recent guests have included Meryl Streep, Jon Stewart, Sarah Jessica Parker, and Aziz Ansari.

Earlier this week, Oscar- and Grammy-winning musician John Legend stopped by to discuss his creative process and how he gets inspired to write his hit songs. He noted that, “I think we have to be honest in our songs. I always quote Nina Simone that ‘it’s an artist’s duty to reflect the times that you’re living in.’” Later in the event, sponsored by the all-new Kia Cadenza, the La La Land actor performed songs from his fifth studio album, “Darkness and Light.”

Posted by The New York Times – TimesTalks on Tuesday, January 24, 2017

Along with hearing John Legend speak and perform, guests were given an exclusive look at a specially designed Kia Cadenza. The vehicle was decked out with chevron-shaped sensors on the hood and trunk that played varying musical beats when pressed, while background music played along. Among the guests having fun with the musical car included musician Kina Grannis, who shared a video on Instagram of herself experimenting with the tunes.

I’ve played guitar, piano, ukulele, violin, and even once tried to make sound out of a flute (failed, btw), but I’ve never played a car! Thanks for that, @kiamotorsusa 🙂 #ad #KiaCadenza

Photographer Jon Taylor Sweet also had a go with the Cadenza, along with musician Kirsten Collins, and posted a compilation video of the two of them jamming out in the Kia.

It’s exciting to see Kia branching out to host events like this and to showcase its lineup of vehicles in fun and creative ways. Here at The News Wheel, we’ll be keeping an eye out for this musical Cadenza when we visit the 2017 Chicago Auto Show. We hope it makes an appearance!

VIDEO: Watch the full interview with John Legend, including his stellar performance