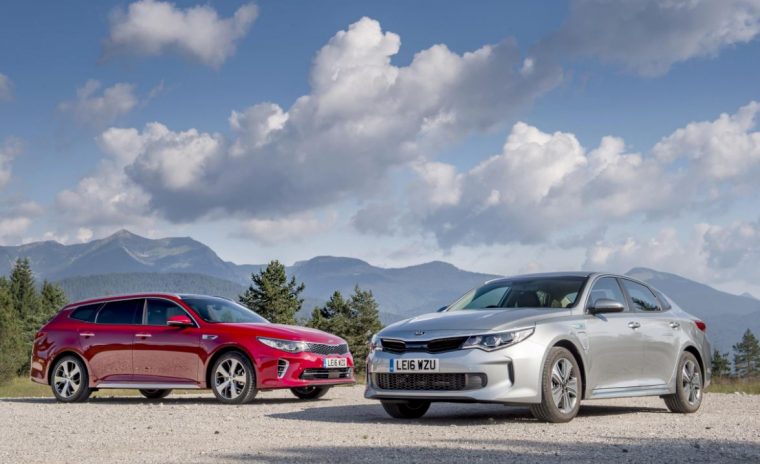 Kia has officially gone green in the United Kingdom. The South Korean carmaker recently launched its first-ever plug-in hybrid model in the UK with the arrival of the 2017 Kia Optima PHEV. This hybrid vehicle was released alongside the Optima Sportswagon, making the Optima’s lineup one of the most versatile in the market.

The Optima PHEV mates a 2.0-liter direct-injection gasoline engine, which churns out 154 horsepower, with a 67 horsepower electric motor. The motor is charged by a 9.8 kWh lithium-ion polymer battery pack. Combined, this hybrid powertrain puts out 202 horsepower and about 276 lb-ft of torque. Despite this big bump of power, the PHEV has a 33-mile range of all-electric driving and get 176.6 mpg—all for the starting price of £31,495 (about $41,670).

These great fuel economy numbers are helped with a more aerodynamic exterior. An active air flap on the front grill drops the car’s drag co-efficient to 0.25 when it’s closed, which makes it significantly greener. Along with this exterior design feature, the PHEV also comes with 17-inch alloy wheels, standard LED daytime running lights, a rearview camera, and a variety of active safety systems.

Interior features for the PHEV include a standard 8.0-inch touch infotainment system with Android Auto and Apple CarPlay, a navigation system, and a 10-speaker sound system.

The Sportswagon also brings plenty of versatility to the Optima’s lineup with 552 liters of cargo space. This is significantly more space than the Optima sedan. This new model will come equipped with a 1.7-liter turbodiesel engine, which makes sense because it will only go on sale in diesel-loving Europe. With 139 horsepower and about 250 lb-ft of torque, it’s got plenty of power and superior fuel economy thanks to its 64.2 mpg.

The addition of these two Optima models will make Kia’s UK lineup even more appealing, while also helping the brand reach its goal of reducing CO2 emissions from its lineup by 25% by the end of the decade.